What an awesome evening, certainly has to go down as one of the best I have ever had. Me and my dad went in search of a Quail that was heard near Eagland Hill yesterday. Well a birder already present said it was still singing when we arrived and sure enough it didn't take long before it's 3 note call wafted over the field to where we were standing. After a while my dad walked a bit further along the road to look for a Whitethroat we could hear and it was then that we both heard a second Quail calling much further to the right than the original bird, had we missed it in flight? No as the original soon piper up once again meaning that there were 2 birds in the field. Amazingly just a few minutes later we picked up the sound of a third bird, this time on the opposite side of the road and a lot closer than the previous two. We moved down to where it was calling and reached a point where it could only have been 15 metres from us at most, but we still couldn't see it, argh! Quail is a species I have yet to see in Britain having heard them on two prior occasions, but hopefully with the birds present here I may be able to see one before the summer is out. Also in this area we had a distant Barn Owl, 2 Buzzard, Kestrel, 2 Grey Partridge, Red Legged Partridge, Yellowhammer, Corn Bunting and several Brown Hares.

However the best part of the evening came when we were driving home through Rawcliffe and a Barn Owl flew across the road ahead of us, quickly followed by a second individual. We stopped the car and I got out and went to a gate that looked out onto a square field that they were hunting in. Both birds were doing circuits of the field so they flew along the side I was on aswell, and from where I was stood I got some incredible views as they quartered past about 5 foot from me at times! I didn't want to disturb them too much so only managed 1 good shot before they moved off and I walked back to the car with the biggest smile on my face, one of the best wildlife moments I have ever had. 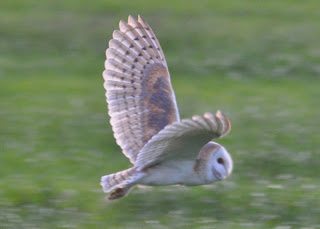