It has reached that time of the year when everything gets very quiet, the summer migrants have all now arrived and are well under way with breeding; very few birds are still migrating so there are few vagrants to entice a twitch, which means that the yearlist comes to a stand still and it become difficult to find anything new. This afternoon I met up with Ash and Aaron and after looking at a few moths they had caught the previous night including Dusky Brocade and Small Clouded Brindle (both new for me) we headed to Brockholes Quarry to see if we could see a Hobby that had been seen recently. On the way we stopped off at Preston Docks where we were treated to fab views of the nesting Common Terns, watching them come and go with fish as well as seeing young and watching the adults courting. In total we counted 16 adults and 6 young however the birds were coming and going so there were most likely many more adults and some pairs were sitting on eggs still, 9 nests in total. 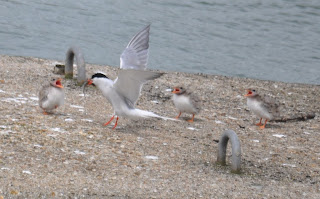 At Brockholes we decided to walk round through the woods and then round the top and west of number 1 pit as this would hopefully produce the most moths. It didn't take long before Ash located a Snout moth and I found an ermine species on a thistle however after this the moths became a lot harder to catch as they were a lot more flighty. We spent a long time in the woods chasing after moths and catching a few species which we are waiting to be identified. The best insects of the day were found when we came out of the woods and along the path which was bordered by long grass up to a medium sized pool, and as we stopped to check a patch of thistles Ash suddenly shouted Banded Demoiselle! It promptly immediately disappeared as it landed however it soon took to the air again and I got my first view of this truly beautiful creature. It was a iridescent blue colour with dark black patches on the end of it's wings which made it stand out in flight from other dragonflies. Unfortunately it didn't land close to us for very long so I only got a few shots, however a Broad Bodied Chaser that landed right next to us was much more obliging. 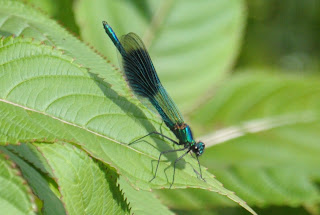 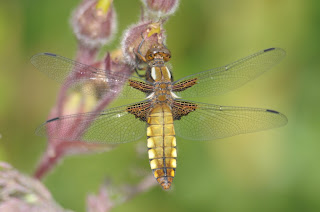 Walking back along the western edge of the reserve the others managed to catch a Narrow Bordered Five Spot Burnet moth which was another new one for me and as we were leaving Ash found a pair of Large Skippers along the entrance road, one of my target species for the day. I will post a full list of the species we saw tomorrow when we have identified the last few moths, and also add a few more pictures. 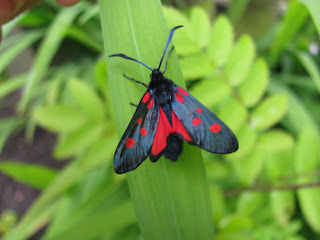