(orange = new for me, green = other, red = bird, blue = mammal) A few days without any birds has led to me focusing more on moths, and what a few days it has been! In the garden I have caught several new species for me including a gorgeous Flame Shoulder (pic 1) and a Small Magpie (pic 2), and yesterday I went out with Ash to Lytham Nature Reserve to look for day flying species and to see how many we could catch. 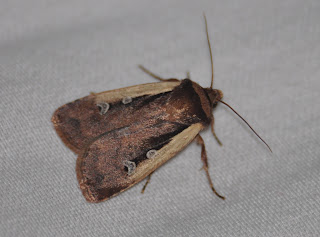 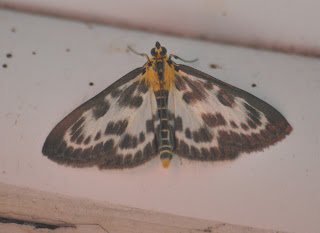 Before we set off I went round to his house and he showed me some of the species he had caught the night before. Scalopped Hazel (pic 3) and Riband Wave (pic 4) were very impressive moths along with plenty of Common Marbled and Garden Carpets and a couple of those dreaded pugs. 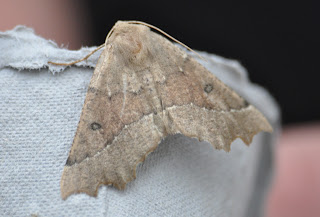 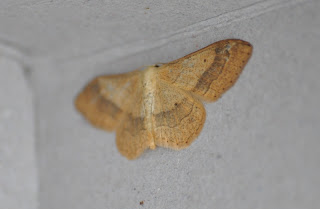 We then set off to the sand dunes of Lythan Nature Reserve and started at the pontins end, walking around the areas of long grass and bushes to look for any moths or caterpillars. It soon became obvious that the most abundant moth species was Silver Ground Carpet, with at least 15 seen with some interesting variants noted between the individuals we caught, such as paleness of the wings, width of the black bar and size. There were plenty of micro moths about in the grass however we concentrated more on the macro species and it total we caught: 1 Latticed Heath (pic 5), 2 Yellow Shell (pic 6), 1 Grass Rivulet and 1 Common Wave. There were several Swallows flying around the east end of the reserve and as Ash was photographing one of the Yellow Shells less than a foot in front of his head, one of them swooped down and plucked it out of thin air and carried it away! This was heading towards being the best moment of the day for sheer humour however it was surpassed by beautiful views of a vixen Fox that appeared ahead of us in the marsh area and watched us for a while before disappearing under a bush possibly to tend to cubs. Shots below courtesy of Ashley Baines. 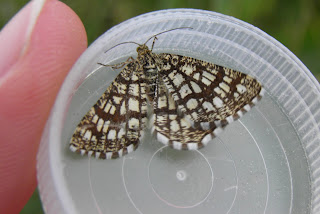 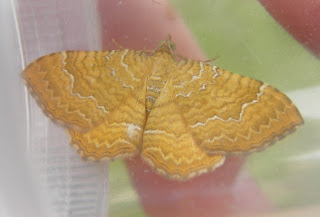