Yesterday morning Bill Aspin found a gorgeous summer plumaged Spotted Sandpiper at Brockholes Quarry/Wetland, which I had to go and see despite the rain that was setting in as I set off. This was my first visit to the site since it's redevelopment into a proper reserve and I was very impressed with the visitor centre and also the range of hides and viewing platforms that were dotted around the sight. I walked from the car park to the viewing area that overlooks number 1 pit, where a group of about 20 birders were already present, and I got my first view of the Spotted Sandpiper (British 262) feeding along the shore below the artificial nest bank, only 50 metres or so from where we were standing allowing for scope filling views! Amongst the birders coming and going were all of the young birders from the area, Ash and Aaron turned up after a while, Lee Harrison from Preston, and Reece Gallagher in the company of his dad Derek. There were plenty of other birds around the lake including massive numbers of Swifts, a Common Sandpiper that at times fed next to the Spotted allowing great views, plenty of Whitethroats and Sedge Warblers around the rushes, and also a Ringed Plover along the back of the pit. 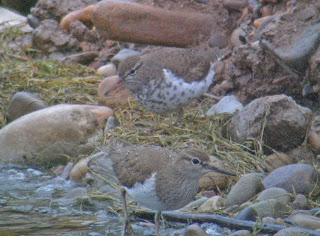 
From here we headed along the motorway north to Cockersands where I had hoped to catch up with a Little Stine and Curlew Sandpiper that were seen the previous evening with the Dunlin flock. However there were no small waders to be found but while I was there I met Paul Ellis and Len Blacow who kindly directed me towards a creek where a pair of Avocets were present. These are my first in the Fylde this year and only my second ever in the Fylde so I was pretty pleased to see them. They were flushed after a short while by a farmer on a quad bike and they flew high off east towards Glasson. Also present was a Little Egret and several Shelducks. The sandpiper and avocets take me up to 180 and 177 for Britain and the Fylde this year respectively.
Posted by Jonny Scragg at 11:58