I don't think I can remember a period of birding in the Fylde which can match the past 3 weeks for amount of rarities found and just generally the number of species around. I suspect that Sunday was the end of this run for me and the final lifer of the spell was a pair of Temminick's Stints (261) that were found by Maurice Jones on the entrance pool at Newton Marsh. They were being difficult when I first arrived by feeding in a creek which could just about be viewed from the road but only a small section of it so the birds were only on view for a short period of time. Also present here were a single Ruff, Common Sandpiper and at least 20 Black Tailed Godwits some of which were in full summer plumage.

On the way home we stopped off at Lytham Crematorium where despite several being heard we could only locate 1 Ring Necked Parakeet calling high up in a tree. My brother took the only photos of it (1 of which below) and I decided to photograph a Jackdaw which was feeding around the edge of the pond amongst the ducks. 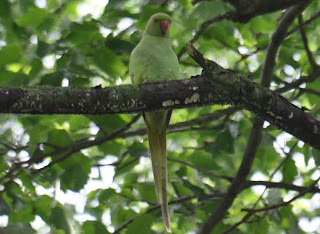 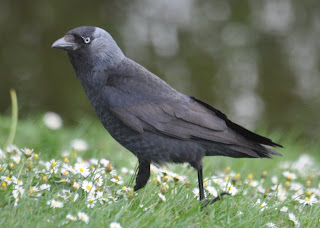