With all my GCSE exams recently I haven't had any real chance to get out birding, or even blog for that matter. Already had 3 exams this week however now I've got a day and a half off till my next one which is Physics on Friday morning. So after getting home today about 11 o'clock I decided to go out and check the local patch to see how the birds were getting on and also to check how many fledged birds I could see. First port of call was Carleton Crematorium where the local male Sparrowhawk flew over the entrance being persued by several Swallows. Upon reaching the pond I was amazed to see a total of 29 Mallards feeding on the water or resting on the bank, the most I have seen at this site. On closer inspection it turned out that 5 of these were almost fully grown youngsters, so whether they had grown up on the pond in the month that I hadn't checked it, or flown in from somewhere nearby I don't know. 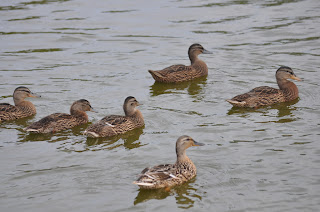 The Coot family was still present, the chicks aren't going to grow much more as they are almost the size of the adults now, it was good to see that all 3 were still there and looking healthy. The colour ringed adult was feeding alongside its young as can be seen in the photos below. 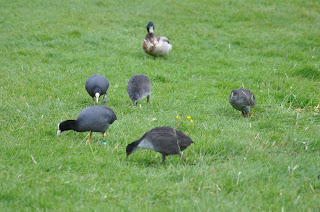 The walk around the rest of the patch produced a few highlights, the best being:

- 2 Swift over the crem and a male Kestrel hunting along the fringes.
- The Mute Swan pair on Bispham Marsh now have 5 young which all looked healthy, and both Great Crested Grebes were still present with one sitting on the nest which may mean that the chicks were tucked up underneath, if there are any chicks that is.
- Single singing Chiffchaff and Whitethroat along the path between the marsh and Robins Lane.
- The Little Grebe still feeding quite happily on the flood by Robins Lane, although I'm surprised it hasn't moved off to look for a mate. A Coot family with 2 large young were also present which hatched out a month ago, however I didn't see the other family but they could be hiding away around the fringes.
Posted by Jonny Scragg at 06:42