The Iberian Chiffchaff in Devonshire Road rock gardens had been heard singing 3 mornings in a row since its discovery on Tuesday, so surely it would be singing again this morning when I went down before school... Of course it wasn't! The weather was meant to be clear but typically it was raining lightly however I found Stuart Piner on sight when I arrived listening to a common Chiffchaff calling in the normal area along the south end. A single Common Whitethroat flew in for a while and started singing nearby, and the regular Lesser Whitethroat was rattling away from a large hawthorn bush. My original plan was to walk from here to school which is about 6km but luckily Stuart was heading that way and offered a very gratefully received lift.


After dipping the bird in the morning I wasn't really planning to go again in the evening, however Len text me around 16:50 saying that it was still present along with a Spotted Flycatcher which is a good bird on the Fylde. My mum dropped me off and just after I got out the car I looked in my bag and found that I had left my binoculars in my other bag, f***! I soon found the 2 Pauls looking for the Spotted Flycatcher (yeartick) and after a few minutes Paul Slade located it sitting out in the open on a bare branch giving great views! He then departed but soon afterwards we heard a Chiffchaff singing in the same area that the Iberian has been, and although it didn't sound like the immigrant bird it didn't sound atypical for a common either. It was sort of similar to a common however it kept adding extra notes in and some different phrases as well. I asked Paul to play the recording he had on his phone of the bird to remind me what it sounded like but as he did it the Chiffchaff shot towards us from its perch and sat up in a nearby tree and carried on singing. I managed to get a single rubbish shot of the bird which appeared to show a bright surpercillium but it was too blurry to pick out anything else. After a while it went silent so I headed home not sure of what to make of the bird. 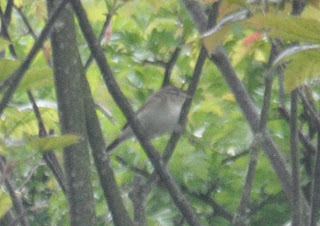 This evening the mystery appears to have been resolved however! Chris Batty found this quote from an article about the identification of Iberian Chiffchaffs, "In the context of spring vagrancy, Iberian Chiffchaff has two major song types; an advertising song used by males trying to attract a mate and a conflict song used primarily during antagonistic interactions with other males. The same is true of Common Chiffchaff, although in that species the advertising and conflict songs are virtually identical. The conflict song of Iberian is very similar to that of Common". He sent this to Stuart who passed it on to me and Paul, which confirmed to us that the bird we had heard and seen was indead the Iberian Chiffchaff (lifer 260). I would like to get down if it is singing tomorrow morning to hear the proper distinctive song but at least I have now seen it, with the flycatcher being a big bonus!
Posted by Jonny Scragg at 14:18