Back to school yesterday after the 4 day weekend and on Monday night I had been on the phone to Ash who had said "all the good birds will turn up now we are going back", cursed words. About 12:30 yesterday whilst sat in Maths I got a text off Paul saying, "Kentish Plover, Cockersands", bugger! I didn't have any way of getting there after school however I rang my grandad who luckily agreed to take me since he wasn't doing anything. We arrived at the car park by the caravan site where a few birders were present and informed me it was still there so it was a quick dash along the 1.5km stretch of coast to Plover Scar where a birder who was already present let me look through his scope to get mt first view of the female Kentish Plover (lifer 259). It was showing about 50 metres away allowing for good scope views from which I could pick out some of the key ID features; light brown sandy colour plumage, thicker and jet black bill, black legs and also it was smaller than the Ringed Plover that was near to it. The wind was still blowing quite strongly from the east so the bird was mainly sitting tight however it did feed briefly a few times. Sorry about the rubbish shot below, better ones can be found on the FBC website, also well done to Pete Woodruff who found the bird! 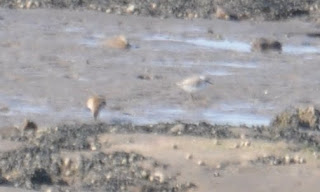 A couple of birders then arrived and told us that there were 4 Yellow Wagtails in the first field past the car park where I had set off from, so on the way back I stopped off and was treated to a flock of 5 birds in total (1 male, 4 female) feeding around the horses and cattle grazing on the grass. Again they were too far off for any good shots but you can just about make out a yellow blob which is the male bird. 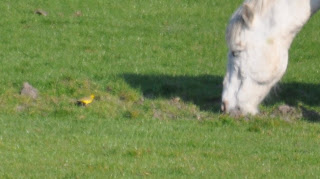