Highlight of a Butterfly survey - a Moth!

Me and Ash did a butterfly survey around the Marton Mere and the golf course north of it, same area that I was in on Monday, to count the numbers of each species in the area. Passing the area with the Bee Orchids we soon got out list underway with several Meadow Browns, Small Skippers and a Common Blue. It soon became obvious that Meadow Brown was easily the most abundant species in the area with Small Skipper quickly following in second. Further round we added Green Veined and Small White, Small Tortoiseshell and Speckled Wood to the list and this made up the 7 species we saw, 4 less than Monday. The totals for each species are as follows:

However it was as we rounded the top of the golf course that Ash spotted the best species of the day. He flushes a medium sized moth from an area of rough grass and after a brief chase he caught in a collection tube allowing us to get a good view. It was immediately obvious that it was a new species for both of us with obvious black markings on the wings meaning we managed to find it right at the back of the moth book and identify it as The Blackneck (appropriately named when you see the photo). A very pretty moth and when Ash text Dave Mcgrath the results of our survey also mentioning the moth, he got a reply saying the it could be the first record for Blackpool! Both photos taken by Ash. 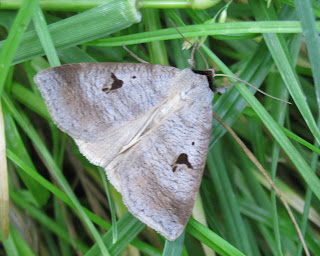 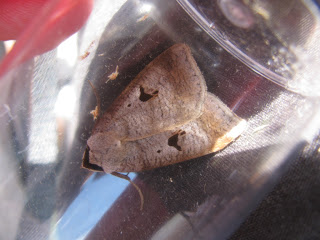