After reading Zac's blog post about his trip to Arnside Knott and Warton Crag on Tuesday (see here) where he saw 23 Butterfly species I couldn't resist a trip back up there so I asked Ash and Aaron if they wanted to come along and they willingly agreed. The weather forecast was for brightening conditions as the day progressed although the temperatures wouldn't be great, only around 16 degrees which could put the dampeners on seeing many species. We arrived at Warton Crag around 12:30 and set off up the right hand side of the crag where we quickly added Speckled Wood, Meadow Brown and Small White to the day list but after this it was pretty quiet till we came out onto a steep incline surrounded by short grass and bramble patches. Here we saw several Peacocks, Red Admiral and a female Common Blue which briefly tricked us into being a Northern Brown Argus! Zac had told me about a meadow after a path through the woods where he had seen most of his species, so we were looking for this however had no idea where it was. We walked around for about half an hour in search of what we had dubbed "The Fabled Meadow of Warton" as we completely failed to find it and followed a path back down to the bottom of the crag that actually brought us about a mile along the road from the car park! The walk back produced Green Veined White and Large White, and when we got back to the car park my dad pointed out a Grayling on the path. Whilst watching both of the resident Peregrines flying around in the company of a Buzzard, Sparrowhawk and 2 Ravens I rang Zac and got directions to the meadow we were looking for, so a quick drive down the road and a short walk up the hill found us walking out into a clearing that looked perfect for butterflies. Despite the forecast being for only 16 degrees after walking up some pretty steep sections for over 2 hours we were boiling and the temperature was actually creeping over 20 degrees which had a dramatic effect on the number of butterflies flying around. We met a guy going a butterfly survey who told us there were several Brimstones around and whilst Ash spoke to him me and Aaron spotted this stunning Small Copper that gave brilliant views, only my second ever and definately one of my favourite species! 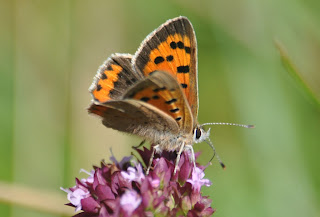 Speaking to the guy he pointed out a very worn High Brown Fritillary that flew past us and also several Gatekeepers in the area. I spotted what looked like a very worn Ringlet however he said he had never seen one up there so that made me doubt that I had seen one. He pointed out an area that was good for Brimstone so Ash went and had a look whilst me and Aaron stayed where we were. Whilst chasing a small brown butterfly I felt my phone ringing and new it would be Ash and sure enough he said he had just found a Brimstone so we ran to where he was and was greeted by a gorgeous male that was so much brighter than I was expecting, a brilliant yellow colour. It was so close that it was hard to photograph especially with the glaring sunshine, and whilst we were watching this I spotted a fresh Ringlet flying behind us that eventually landed on Aaron's hand! We added Small Skipper to the day list here and then headed off to Leighton Moss where we saw a juvenile Cuckoo (yeartick) from the Eric Morcambe Hide along with 3 Greenshank and a female Marsh Harrier which flew over. 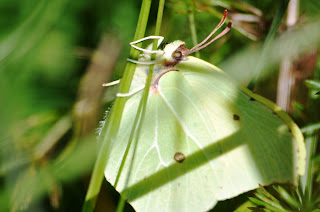 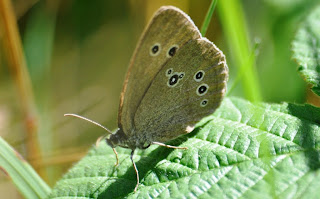 After a quick stop off at the visitor centre to get a drink and look for Marsh Tit (unsuccessfully) we went to out final stop of the day, Arnside Knott where we hoped for Scotch Argus butterfly. Walking up the hill we saw a battered and then a pristine Dark Green Fritillary flying around before a dark butterfly caught our attention and after a brief chase it settled and allowed us to confirm it was a Scotch Argus, result! As it happened they were everywhere on the Knott and we must have had at least 75 in total, along with several Comma and a few more Graylings. So overall we got 18 species of Butterfly, 2 of which were new for Ash (Brimstone and Scotch Argus), 3 new for me (+Ringlet) and 4 new for Aaron (+Small Copper). I will post more photos tomorrow once I have sorted them out. 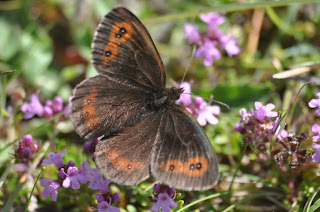 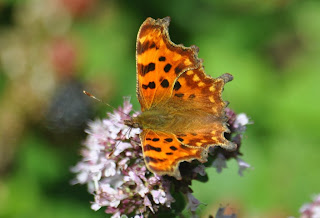