The birding during the day was pretty poor however I was looking forward to the evening as I was going on a bat walk around Stanley Park with a few of the rangers, Ash, Aaron, Dave and some of the public. We started around 9pm and set off with a load of torches and a few bat detectors which quickly picked up the clicking of a Pipistrelle Bat flying around the edge of the bowling greens so we all stopped to look. Whilst we were doing this a large moth flew in front of Ash's face and with some excellent net skill he managed to catch it and upon placing in a pot we could see it was an Old Lady moth, my first ever of this large species, and further round a Crescent moth in the gardens. Walking down towards the lake we saw a Brown Long Eared Bat and then over the lake itself we watched at least 4 Daubenton's Bats picking insects off the surface of the water. On the boathouse we found 3 more Old Lady moths resting on the wall

Walking up along the edge of the northern lake and then across the road into the woodland gardens we saw several more Pipistrelle Bats however there wasn't much else about until the definate highlight of the night was found on the way back to the visitor centre. Walking along the western side of the north lake Ash spotted a couple of moths resting up on an oak tree so we went to investigate and found that it was covered in at least 40 moths including 5 absolutely beautiful Red Underwings, a new species for me and probably my new favourite species out of all the ones I've seen. I hadn't taken my camera since I wasn't expecting to need it but luckily Ash did so the below photo is one of his and shows how nice they were. 4 new moths and 2 new bats meant a very good night and hopefully I will be doing another event at the mere on wednesday. 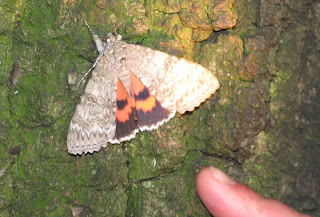