On Wednesday a Wryneck was found on Horwich Moor, right on the border of Lancashire and Greater Manchester however it disappeared on Thursday before being re found on the morning of Friday. Ash and Aaron thought it was worth a look so we headed off in the morning arriving on site about 11:00 and after a quick look round we found the area where it had been seen last and also a couple of birders who informed us that it hadn't been seen since about 8:30. In the fields next to the woods where it had been seen were a few Pied Wagtails including on melanistic bird that was very dark, a sooty black colour all over. The birders said it was last seen flying over the road where we viewing up onto the moors above us so we decided to head up there but unfortunately all we could find were 7 Wheatear, 3 Kestrels and a Tree Pipit. Despite this disappointment a nice surprise was found on the slate bank next to the road as we passed on the way down, a gorgeous Wall Brown butterfly, a new species for all 3 of us. It gave great views however it didn't like to sit still for very long and whenever it did land it was always in an awkward place! Got a few half decent shots and the best 2 are below. This is my 28th species of British butterfly and my 12th new species of the year. 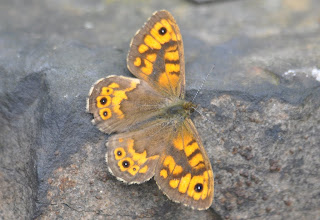 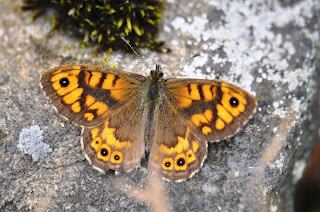