All the C's (yesterday)

My parents have been away for the past couple of days so I was without transport yesterday, meaning that I could only get out birding using buses. I decided that I would go down to Stanley Park and Marton Mere in the hope of photographing more colour ringed coots, and also to get a couple of year ticks. 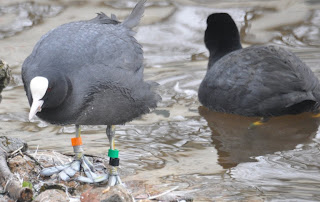 Unlike my last visit to the park, both of the lakes were unfrozen meaning that the Coots were much more spread out and also reduced in numbers as most of them had moved back to their breeding sites. Also they were reluctant to come out of the water so I only managed to read 10 combinations and most of these were of birds on the water where I could see the rings. 3 of these birds I photographed on the park on 02/01/2011 and I am currently awaiting details on the other 7. Also present was my first ever darvic ringed gull, an adult Black Headed Gull. Talking to Craig Brookes about it he informed me that it was ringed in Denmark and has wintered in the park every year since, before returning to Denmark for the summer to breed. 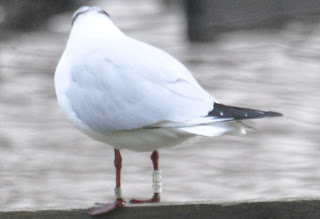 I then walked round to Marton Mere where I found a large flock of gulls bathing in the centre of the lake. Usually I wouldn't bother with gulls as I don't have the patience, however I decided to try my luck and was rewarded with a stunning adult Mediterranean Gull in summer plumage. My main target bird of the day was Cetti's Warbler (yeartick) and I hoped that if I staked in the Fylde Bird Club hide a bird would reveal itself in the reeds on either side, as they have done on several previous visits. After around 30 minutes I eventually picked up the call of a bird in the right hand reed bed and after a few minutes it appeared hopping around the base of the reeds, before flying across the water in front of the hide. On the way back I stopped off at the feeding station where a female Brambling was coming to the seed along with several Chaffinches and at least 8 Reed Buntings. 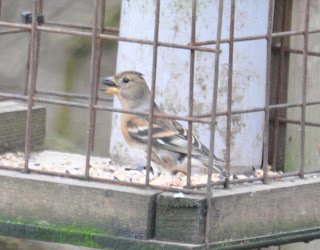 In the afternoon I went round to my grandparents house and my grandad suggested we take the dog for a walk around the mere. The birds were very similar to when I had been there in the morning however I bumped into Maurice Jones and Frank Bird in the Fylde Bird Club hide, who informed me of a Red Kite that Frank had seen over the mere at 2pm!
Posted by Jonny Scragg at 12:48