Marton Mere at it's best

I had only planned on spending a couple of hours at Marton Mere yesterday however the quality of the birds present meant that I actually ended up staying the entire day! As usual I got the bus to Victoria Hospital and walked through Stanley Park to get to the mere. 2 pairs of Great Crested Grebes were present, 1 at each end of the north lake. One of the pairs briefly started their beautiful courtship dance with the male diving underwater before emerging with some pond weed that he would present to the female. Unfortunately I didn't have my camera out at this point! So instead here's a photo of them doing the same behavior from last year. 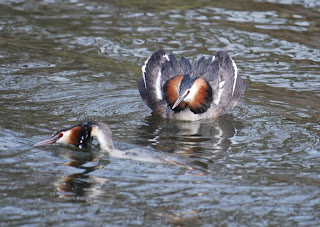 The darvic ringed Black Headed Gull which was ringed near Copenhagen, Denmark on 25/03/2008 was still present on the south lake. The previous evening Stephen Dunstan had told me about an adult Mediterranean Gull present on Lawson's Field opposite the park that was also bearing a white darvic ring but he hadn't managed to read the ring combination. So I set myself the challenge of trying to read the ring, sound easy? Well location the bird wasn't too difficult, a stunning adult Mediterranean Gull with jet black head and pure white wings, however getting close enough to read the ring was problematic as it was very jittery. I took over 200 photos in the hope that I would be able to piece together the ring from those, and eventually I managed to read the ring as 3N92, and after some enquiries I found that it had been ringed near Antwerpen, Belgium on 14/06/2004 with a green ring, before being re-ringed with the white ring at the same site in 24/06/2006. Full details can be found on Dave McGraths blog. 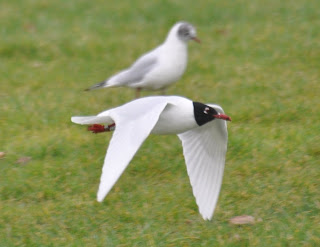 Then it was on to the mere where the feeders were alive with birds coming and going. A male Brambling was visiting the seed with a group of Chaffinches and is my second bird there in a week following the adult female I had on Friday. At least 4 Tree Sparrows were also coming to the seed along with at 10+ Reed Buntings, some of the males in gorgeous summer plumage. Then it was on to the Fylde Bird Club hide where a couple of young birders were already set up, Ashley Baines and Aaron Cregan. We tried counting the birds present on the mere which sounds easier than it actually is! A flock of Goldeneye were in the middle of the mere, most the males were displaying to the males and we counted 9 adult males, 1 1st winter male and at least 7 female. As usual there were plenty of Cormorants perched up either side of the scrape and although they were all stood still we still had trouble counting them which wasn't helped with new birds flying in every now and then; at the height of the day we counted 30 birds which is the most I have seen here at any one time. The mere usually doesn't support much in the way of waders yet there were at least 20 Lapwings present on the scrape along with a Snipe that ventured out of the reeds for a few minutes to feed (photo below from Inned Farm Marsh). The highlight however was a single Dunlin that flew in from the west and alighted on the scrape and fed for 10 minutes or so before flying back from whence it came. This is my first record of the species at the site and takes my Marton Mere list to 120 species. 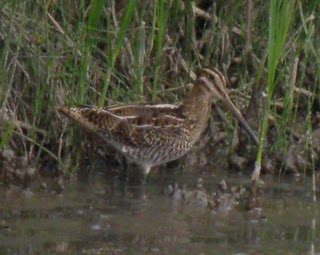 Other highlights of the visit included a Cetti's Warbler singing next to the Fylde Bird Club hide, 2 Long Eared Owls roosting in bushes away from their normal area, 2 Buzzard including the now resident bird on the island, a female Sparrowhawk shooting across the path in front of us whilst looking for the owls, the white headed Blackbird still present on the south side and watching Pink Footed Geese through the mist over the barns at the back of the reserve.
Posted by Jonny Scragg at 10:19