Fab day on the Patch

A gorgeous day with wall to wall sunshine throughout meaning that I wanted to get out and check out my new local patch to get some preliminary numbers of the species present. Unfortunately I had to be back at school at 5:30 to help out with a year 9 options evening which meant that I had from 3:20-5:00 to walk the 5 miles or so around the patch, yet it didn't exactly go to plan.

Walking along Blackpool Road towards Carleton Crematorium I was surprised by the number of flowers that had bloomed into flower overnight, plenty of snowdrops and even a few crocuses poking up through the soil. I was also amazed to see my first butterfly of the year flutter across the road in front of me, and the few seconds it took me to comprehend this early sighting stooped me from being able to identify which species it was, but it wasn't large so maybe a Small Tortoiseshell.

Reaching the crematorium I thought it would be a good idea to monitor the bird numbers on the small pond at the south end. Today the totals were 23 Mallard (12 males), 5 Canada Geese, 3 Greylag Geese, 4 Moorhen, 3+ Coots. Initially there were 2 Coot on the pond, 1 of which was colour ringed, probably a bird that was ringed at Stanley Park during the cold snap. 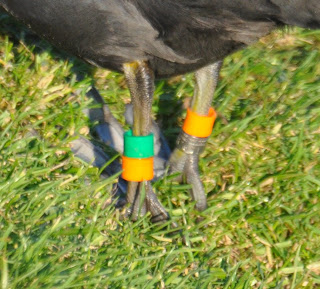 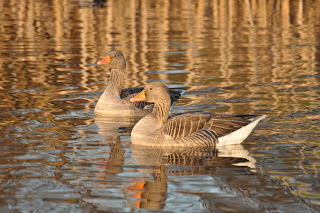 I was then confronted with a surprise in the form of a large flock of at least 500 Pink Footed Geese feeding in the fields at the south end of the crematorium. This put pay to my previous plans as I decided to search through them in the hope of finding anything interesting. There was a flock of 21 Greylag Geese present with them which according to one of the local dog walkers are resident birds at the crematorium, but are separate from the 3 that live in the pond. I suspect that this was the same Pink Footed Goose flock that I saw a few days ago on the other side of Carleton, as this flock also contained a neck collared bird, which this time was close enough to read, LAF. I'm going to send the details off soon. 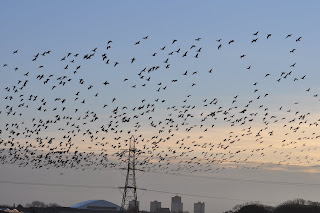 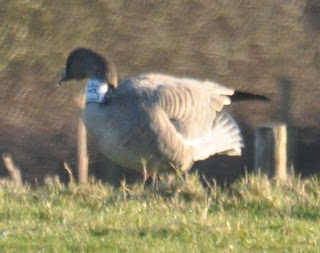 After searching through the pink feet i headed back to the pond and was surprised to see a different colour ringed coot feeding on the bank, however the original bird was nowhere to be seen, both were with an unringed companion. So either there were 2 different pairs which had swapped whilst I was watching the geese, or the original colour ringed bird had been moved on by the second bird (there was definitely only 2 birds on the pond at any one time). It should be interesting to see how this site develops during the course of the year. 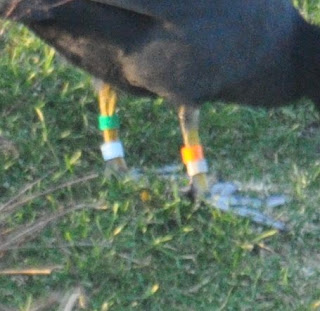