Yesterday I met up with Aaron Cregan and Ashley Baines on Lawson's Field at 06:45 in the hope of counting the whooper swans before they leave at dawn to feed in other areas. Unfortunately when we reached Marton Mere there weren't any swans to be seen apart from the resident 4 Mutes Swans; however we did manage to see a large flock of 200+ Pink Footed Geese going over north, probably to feed somewhere Over Wyre. We headed round to the FBC hide to see what was on the mere and found that a small group of Cormorants had already converged on the scrape, 9 birds at 07:30. We searched the barn at the back of the mere in the hope that the Little Owl would be perched in its usual perch; however the only birds present were 3 Stock Doves. There were plenty of ducks on the mere itself with large numbers of Mallard, at least 50 Teal, and flotillas of 15 Goldeneye, 20 Tufted Duck and 25+ Shoveler moving around on the water. There were surprisingly few gulls present with Herring Gull being the only species on the water, with small numbers of Black Headed Gulls flying over west, from roosts to their feeding areas. At this point the Cetti's Warbler fired up from the reeds next to the hide, the first time this year that I have heard it fully singing; a sure sign of spring; as was the first of several Bees that we saw during the day. The Cormorant number had reached 15 by the time we left the hide. 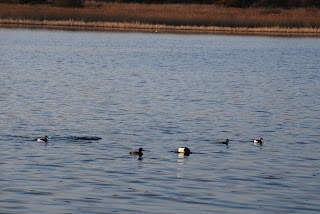 We then decided to head up the bridle path at the north end in the hope of connecting with some more species for the day list. A pair of Mistle Thrush were showing very well near to Staining Nook and whilst we were watching them a small flock of birds shot out of a nearby bush and alighted in an alder tree further down the path. Me and Ash immediately set out scopes up and there in the tree were 4 Siskin! These really are a beautiful little bird, the males especially with their bright green plumage and deep black caps. 3 more birds joined them and we watched them feeding for 10 minutes before a dog walker flushed them and they flew out of sight; there were also 6 Goldfinch and 8 Greenfinch feeding nearby. Further along the track our first bird of prey of the day in the form of a male Sparrowhawk flew over towards Staining, and a flock of 15+ Fieldfare were feeding on the golf course before retreating back into the bushes when a golfer rifled a shot down the green past them. Skylark filled the air with their undulating songs whereas the high pitched calls of Long Tailed Tits came from several areas of bushes along the way. A pair of male Great Spotted Woodpeckers provided a great spectacle as they chased each other around the trees lining the path. 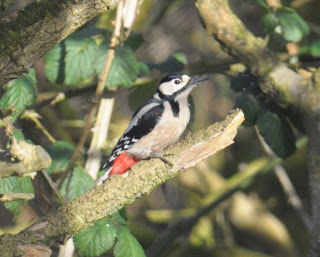 After this we headed back to the mere where we located a pair of Long Eared Owls in the same bush that they were in on Tuesday, one of which was showing very well, staring at us with its fiery orange eyes. At this point the ranger Larry joined us and informed us that the adult Mediterranean Gull was still present on Lawson's Field, but before we headed there we called into the container hide to check the gulls on the mere in case it had sneaked in without us noticing. No sooner had I set up my scope than Larry called "Water Rail" (year tick) and pointed us in the direction of one which had emerged from the reeds and attempted to cross the water before seeing that it was a bad idea and turning round and heading back from whence it came. We then walked towards the field and a call above us drew our attention to a pair of Curlew that were heading high to the west as did a large flock of Rooks. A beautiful female Kestrel was hunting near to Lawson's field and showing very well as it perched up in a tree above us, and a Coal Tit calling from a bush next to the path was a surprise addition to the day list and the only one we saw during the day. As we reached the field it became clear that the gulls had all dispersed as there were only 50 or so birds present, however some of them were Common Gulls in their summer plumage which are always nice to see. We decided to head back to the feeding station at the mere and return later on in the hope that our target bird would re-appear. 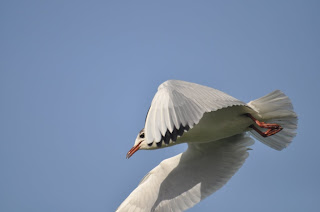 The feeders were alive with birds coming and going, lots of Blue, Great and Long Tailed Tits on the fat balls, Reed Buntings on the seed and a couple of Robin and Dunnock foraging around on the floor. However it was the scarcer species which provided the highlights of the stop, with at least 5 Tree Sparrows feeding alongside 2 Brambling and at least 20 Chaffinches. Then Larry appeared and told us that there was a pair of Siskin feeding in the alders outside of the hide that we had probably walked right past on the way to the hide! 2 male birds were showing very well and even called occasionally, a brilliant noise. 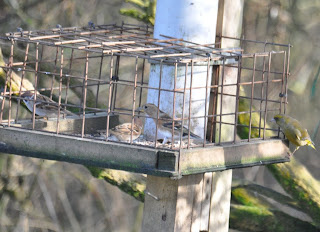 We headed back to Lawson's Field and were relieved to see that there were several hundred gulls present and feeding on the south side. It didn't take us long to locate the adult Mediterranean Gull; with its jet black head standing out a mile away. Unfortunately our plan to entice the gulls in with bread failed miserably as they took no notice whatsoever of the food so our views of the med gull were distant. We also managed to clear up some of the commoner species for the day list here, with House Sparrows near the allotments, Feral Pigeon over the houses, Magpie and Pied Wagtail on the field and Carrion Crow flying over. As we started walking back to the mere a Meadow Pipit exploded from a patch of rough grass next to the path calling loudly and making all of us jump. This was an unusual place for Meadow Pipit and could indicate a migrant bird. Blackbird and Song Thrush were in evidence on the walk back to the mere with several of each singing loudly from the surrounding trees. 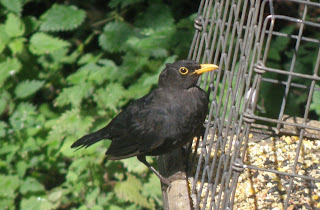 Another 2 Cetti's Warblers were calling/singing from the south west corner of the mere near to the inflow, a good sign that they have survived the hard winter. Another species that seems to have done well over the cold snap is Wren with several birds heard singing around the reserve during the day. A reminder that winter is still with us came in the form of a small group of Redwings that were feeding underneath a row of bushes next to the hide, and upon entering the hide we were greeted by a large flock of gulls bathing in front of us providing a good opportunity to study them more closely. We picked out at least 3 adult Lesser Black Back Gulls amongst the masses of Herrings and then the massive Greater Black Back Gull turned up, dwarfing all the other bird around. A group of 7 Wigeon at the back of the mere made it onto the day list as did a Grey Heron flying over north. 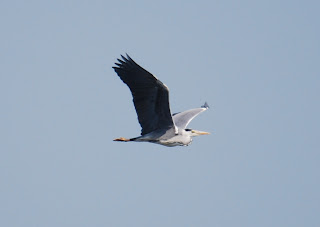 We made our final stop off at the FBC hide for an hour in the hope that a Bittern might do a fly past. The wildfowl numbers had increased on those from the morning, with small numbers of Greylag and Canada Geese making a racket in front of the hide, Moorhen and Coot chasing each other about the mere defending their own territories, and the male Pochard with the broken foot in its usual spot on the scrape sleeping. A trio of Gadwall were feeding on the far side of the mere, the two males in their sleek grey plumage chasing off any Mallard that came too close for their liking. Aaron picked up a pair of Buzzards soaring over the barns at the back, before they were joined by 2 more birds coming across from the Staining direction; amazingly these were then joined by another 4 birds and all 8 circled together on a thermal, a sight record for me. A pair of Kestrels were also present in the fields at the north side, one of which alighted on the owl box which is situated on the island. It hopped down onto the entrance to the box and peered inside before quickly jumping back and away which suggested to us that there must be something already in the box that had scared it off. A pair of Jackdaws also alighted on the box but they decided not to investigate which was probably a good idea! 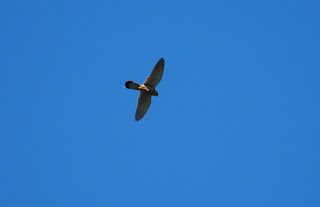 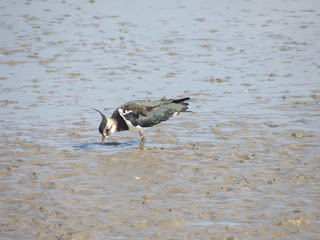 A large flock of Woodpigeons were present in the north fields and kept getting spooked by an unseen raptor (Larry had seen a Peregrine earlier but we missed it), and several Collard Doves were also present nearby. At least 100 Linnets perched up on the wires over the field, and a flock of Lapwings were commuting between here and the scrape on the mere, their "peewit" calls showing why they are sometimes named as such. The sun was starting to set and a pair of male Pheasants on the island looked stunning with the light illuminating their golden plumage. We did one last circuit of the mere, hoping for the Little Owl to appear on the barn as we rounded the top corner however it wasn't to be in the time I had. Several flocks of Starlings headed over to their roost site on Blackpool north pier, and whilst walking back along the north side a Woodcock appeared from its day time roost spot, darting away through the trees as I neared. Ash and Aaron had gone back round the other side of the mere and text me saying that 5 Whooper Swan had just dropped in, a great end to the day and the 67th species in all. Later on I found out that the others had seen 2 Little Owl and a Barn Owl after I had left which took our combined total to 69 species. A great achievement for 11 hours work.
Posted by Jonny Scragg at 13:00