Make your mind up!

The weather could not make it's mind up today on how it was going to be, the morning started with a glorious sunshine but by 9am it was raining, before the sun re-emerged around 12. My mum had agreed to take me out after to school and I had planned to go to Marton Mere in the hope of catching up with Cetti's Warbler and Water Rail. However whilst walking home from school I could here the Pink Footed Geese to the west of Carleton and I decided to head Over Wyre to see if I could find any Barnacle or Brent amongst the large Pink Feet flocks.

My plans were somewhat scuppered by the entire length of Bradshaw Lane between Pilling and Eagland Hill being closed! This meant I couldn't search an area where I had seen geese on my last visit and also lost any chance I seeing a Short Eared Owl which had been in the area. Instead I headed down to the Lane Ends car park in the hope some geese would be out on the marsh. Only 500 Pink Footed Geese or so were present from the sea wall however they were close in meaning they were easy to search through, another neck collared bird was noted amongst them but I couldn't read the letters, there seem to be allot of them about this winter. A large male Peregrine Falcon was sitting on the edge of the marsh watching the waders feeding out on the mud, surely the same bird that I saw 2 weeks ago at the same location? A flock of 22 Whooper Swans were feeding on a small pool in the distance, and although I didn't manage any photos today I think the blog needs a dash of colour so below is a picture of the bird present on Fleetwood Marine Lakes a few weeks ago. 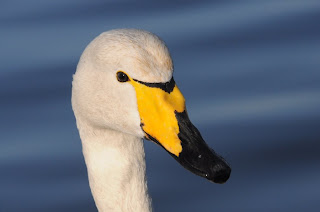 Although spring seems to be on its way the light still starts to go at around 5pm so I thought that before it faded I would head down to Knott End in the hope that some birds would be present on the incoming tide. Plenty of Cormorants were flying west out of the bay as did a trio of Kittiwakes (yeartick) and a pair of Eider. A large flock of gulls were present on the beach off the esplanade but unfortunately most were sleeping so I couldn't find anything else amongst them. With my year tick I headed home happy and I am now on 121 species for the year all in the Fylde.
Posted by Jonny Scragg at 13:36