I've finally managed to sort out all my photographs from the weekend, and since I've got some free time I will do a full post about the weekends birding, so here goes.

The day started off early morning with my mum doing the driving, (as my dad doesn't usually get up till 10), and first port of call was the feeding station at Bradshaw Lane to see if the Barn Owls would still be around. Pulling up I quickly spotted one bird in a distant field and then a second in the field closest to the road, giving brilliant views as it hunted in the early morning sun. Also present were 3 Yellowhammers and a pair of Stock Doves (year tick) in the adjacent field. 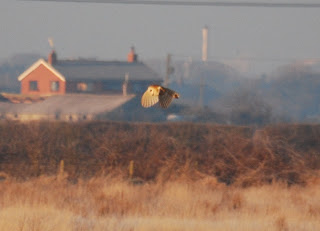 Then it was on to Pilling Lane ends to look for some geese, and after a quick search I managed to locate a flock of 600 or so Pink Footed Geese in fields just west of the car park. From the seawall I managed to pick out an adult White Fronted Goose (year tick) with them although apparently a brent goose was seen in the same area later in the day. On the marsh itself was a male Peregrine that was sitting on the tide edge watching the wader flock, and at least 60 Whooper Swans scattered around before they slowly departed for the inland pastures. I then decided to head up to Cockersands to try and locate the Snow Bunting that had been present for a few days previously, yet there was no sign along the sea wall towards the abbey. However there were plenty of birds about with yearticks coming in the form of a beautiful male Brambling, Sanderling and finally Great Crested Grebe; and the estuary also held massive flocks of Wigeon with Teal, Pintail and a few Eider mixed in. The rest of the morning passed without much incidence apart from a Little Owl (yeartick) on the ruined barn by Jeremy Lane and a male Goldeneye on Conder Pool.
When I arrived home at lunch time a parcel awaited for me on the kitchen table, and I knew immediately what it was, my new Nikon D90 camera. I hadn't expected it to arrive till Monday so I was over the moon and immediately wanted to test it out. So my earlier plans went out the window and I decided to go down to Fleetwood Marine Lakes as this is one of the best places to get close to good birds that aren't too jumpy. Upon arrival I spotted the Whooper Swan that has taken up residence this winter on the near bank and over the next 30 minutes it gave unbelievable views down to a few feet. 6 Mute Swans were also present and I managed to read 3 of the rings, BU4 which from my notes I believe was one of the cygnets that was raised on the Marine Lakes last year, and SXV and SXY which are one of 2 pairs of birds at Fleetwood Nature Reserve, presumably that have moved here in the harsh weather as the marine lakes don't completely freeze. 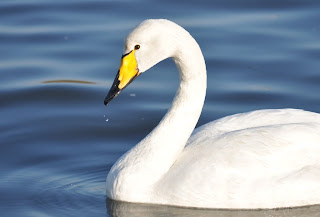 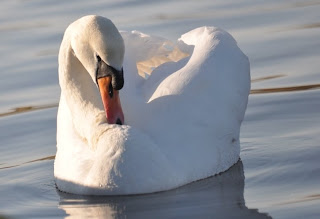 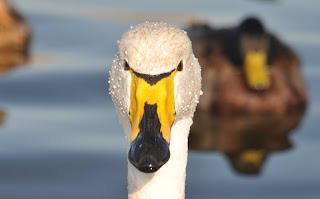 It was then on to Thornton ICI Reservoir where the Ring Necked Duck (year tick) had once again relocated for a single day to it's original host lake. It never seems to stay in one place for very long so I was glad to have been able to catch up with it with a group of 9 Pochard and 3 Tufted Ducks. This is now the 5th time I've seen this bird, following sightings at Marton Mere, Fleetwood Marine Lakes, Preesall Flashes and the ICI Reservoir. Also on the reservoir were a pair of Goldeneye, the male of the pair treating me and my dad to a delightful viewing of it's courtship dance as it tried to catch the eye of the female, even if it didn't have any competition. Crappy record shot below of the Ring Necked Duck. 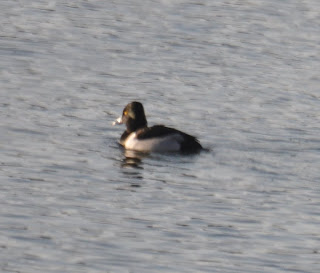 For the last part of the day I wanted to try and get some better shots of the Red Necked Grebe at Fairhaven lake, however when I arrived it was sitting right in the middle of the lake with a trio of male Pochards, and never came close to the banks. Luckily there were plenty of other birds to photograph in the evening sunlight, a male Shoveler was a surprise feeding amongst the Mallards and Black Headed Gulls. 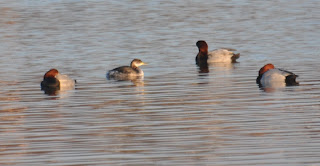 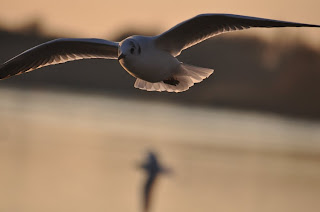 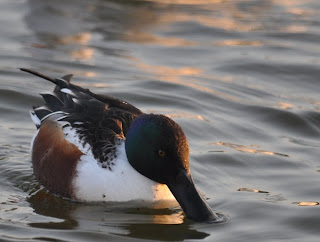 The final stop of the day was Ashton Gardens in the centre of St Anne's, where a male Mandarin (year tick) had been reported as being present on the small pond in the north corner. The pond was very small and mostly frozen but nevertheless there were plenty of Mallards present and the stunning male Mandarin which was in it's full summer plumage. Whilst photographing it I heard quite a commotion above me and looked up to see a large flock of at least 50 Greenfinches; one of the highest numbers I have ever seen together; in the trees around the pond, and whilst looking through them I located a single male Siskin (yeartick) which was a very nice surprise. 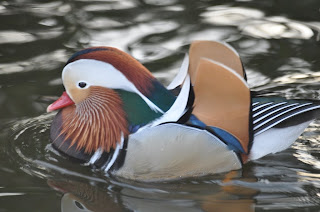 So overall a great day with 78 species seen in the Fylde area and 9 year ticks taking my year list up to 115 species.
Posted by Jonny Scragg at 12:28