Brilliant Butterflies and a Scaup

After the torrential showers yesterday it was a relief to have a dry day today albeit cloudy till later on in the afternoon. Ash asked if I wanted to join him and Aaron to go to Brockholes so I agreed since I had no transport for the day and we hoped to get some good butterflies in the area. I met them in Stanley Park where I had a juvenile Little Grebe (don't think they bred here so surprised to see it) and a Great Spotted Woodpecker calling out of site somewhere. At Ash's house he showed me a couple of moths he had caught the night before, including my first Spectacle moth. At Brockholes we headed for Boilton Woods to look for White Letter Hairstreaks at one end, and Purple Hairstreaks at the other end. Unfortunately when we were at the east end looking for the White Letters the sun wasn't shining and there was a crisp breeze blowing meaning that if the butterflies were there they weren't flying around. However we did have out first of at least 8 Comma's here. 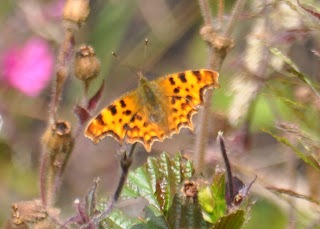 Moving through the woods we focused on moths and amongst plenty of Twin Spot Carpets we also caught Mother of Pearl and Beautiful China Mark (both nfm). We also saw a male Banded Demoiselle and several large Brown Hawker dragonflies, including one which caught a Narrow Bordered Five Spot Burnet out of the air and took it to a nearby tree to consume. We reached the area where the Purple Hairstreaks and quickly spotted a butterfly flying midway up a tall oak tree but unfortunately I didn't get any good views so couldn't confirm it as that species, even though Ash is pretty sure it was one. Further round Ash found our first Gatekeeper butterfly of the year which showed really well and I managed my first shots of this species. 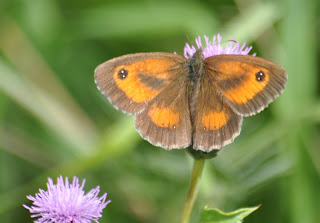 Earlier on in the day I had got a text off Paul Slade saying that a drake Scaup was present on Glasson Docks and since we all needed it for our yearlists we went up and had a look to see if it was still present. We were worried that it might be in eclipse plumage like most of the Tufted Ducks we had seen during the day, however luckily when we arrived we easily picked it out as it was still in it's proper plumage. Scaup has been surprisingly scarce in the Fylde this year and this is the first twitchable bird so I suspect plenty of people will be trying to see it to add it to their yearlists. 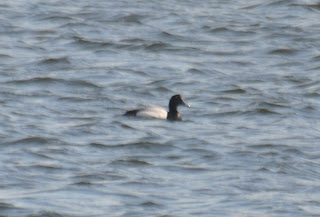 On the way home we decided to call in at Bispham Marsh to see if we could find the Mandarins however they couldn't be seen and were probably hiding out of site on one of the islands. There were plenty of butterflies around here including several Large Skippers and Red Admirals that posed nicely for photos. The Scaup takes me up to 186 and 183 for the British and Fylde yearlists respectively. 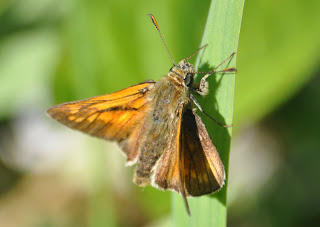 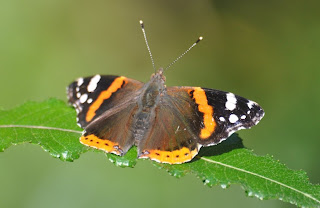