Once again today the weather has been all over the place, raining heavily at times and then glorious sunshine a few minutes later. I decided not to go out till the evening when I hoped my dad would agree to take me out, and luckily he did. We started off at Rossall Point where the sea was very quiet in fact the only birds at all apart from the gulls were 2 Gannets distantly north and 2 Sandwich Terns and 9 Curlews south. So I thought it would be worth checking Skippool Creek to see if any waders had turned up, especially after the AGP a few days ago. As it was the finder of the AGP Paul Slade was already present and pointed out a few things such as a 2nd summer Yellow Legged Gull and 3 Greenshank amongst at least 100 Redshanks. Other nice waders in the area included at least 9 Common Sandpipers and a large flock of 65+ Black Tailed Godwits, many of which were in their gorgeous gull summer plumage. We got discussing yearlists as we are pretty close together in the Fylde Yearlist Competition, and I mentioned that I still need Tawny Owl, the only resident Fylde species that I haven't seen this year. He suggested that the woods around the church in Singleton are a good place to look, so we headed off there in the hope of finding one roosting before going out for the night.

Getting out of the car my dad heard a couple of ferociously alarm calling Blackbirds in the woods opposite the church, so we headed over to find out what was getting them all worked up. Walking along a path towards a large oak that they were flying around I noticed a brown shape sticking out the top of what appeared to be a hollow in the tree, and sure enough it was a Tawny Owl (yeartick). It was obviously getting very agitated by the Blackbird's aggressions so it flew out of it's hole and up onto a higher branch, typically facing away from us. Luckily it turned it's head from time to time allowing me to get the bellow shots. 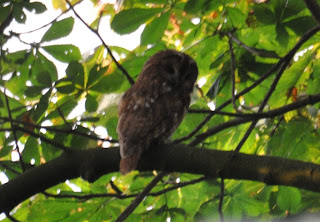 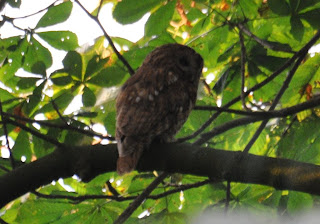