The good run I have had recently continues into today as an early morning start saw me back at St Michael's with my mum to look for the Kingfisher from yesterday. Yesterday I stood in the same spot for an hour or so and failed to see it, however just 10 minutes into the vigil today I spotted the familiar shape and flight of the Kingfisher (yeartick) flying upriver and then turning up the Brock before landing out of view in some riverside reeds. I moved round to get a better at which point it flew back towards us and over the bank we were stood on, being lost from sight as it dived down to river level on the other side. We walked back towards St Michael's and were treated with a gorgeous display as it flew past us twice more showing off it's vivid blue upper parts and the rich orange breast feathers. Happy with this I headed home thinking it would be hard to beat as the highlight of the day.

I had been at home for about an hour when I got a text off Ash, informing me that Dave had just text him saying he had found a White Letter Hairstreak in Devonshire Road Rock Garden, the first of the season. Luckily I managed to get my mum to take me so I was on site within 25 minutes where I met Dave who showed me the area where he had seen it. The problem with this particular species is that they tend to feed high up in the tree canopy, and on this particular day they were only flying for short periods before settling down for 10 minutes at a time. We looked around one side of a line of sycamores and other trees where he had seen 1 and possibly 2 earlier, and then he went round the other side to see if he could locate anymore. After a while he shouted me over and pointed out a beautiful White Letter Hairstreak quite low down, just above head height but a few metres away, seemingly laying eggs on some of the lower leaves. We watched it in this area for 10 minutes or so as it kept landing on a leaf then moving down to its base and obviously laying an egg before returning to the top of the leaf and starting again. I managed a few half decent shots of this new butterfly for me before heading back extremely happy with the day. 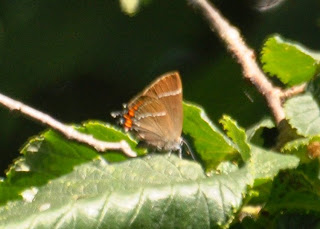 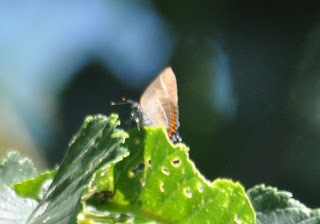 Tomorrow I will be going to Arnside Knott and Foulshaw Moss in North Lancs/South Lakes to look for butterflies and dragonflies with Ash and Aaron, so will report back hopefully with lots of photos.
Posted by Jonny Scragg at 07:58