Lifers across the Board

Be warned that this will be quite a long post with lots of photos and lots of different types of wildlife described (Insects, Birds, Reptiles in different colours). The day started with picking up Ash and Aaron at 9am before going to Skippool Creek to try and see an American Golden Plover which had turned up the previous evening, and which I had failed to see in the falling light when it did. Luckily it was still being reported in the morning so we parked in the car park and walked north towards Ramper Pot expecting there to already be people present as not many had connected the previous evening. However we didn't spot anyone else in the area we we set up in a gap between the jetties that allowed goods views over the mud around the bend in the river where it had been seen. Me and Ash had the scopes and quickly located 4 Golden Plovers in winter plumage around a small pool, and then a little further to the left a full summer plumage and darker bird, the American Golden Plover (British 263). It had noticeably darker plumage especially on it's back, a larger white flash on the neck, and when it moved closer to the other plovers it was obviously smaller and slenderer in structure. Distant pic below sort of shows these features however much better shots can be seen on the Fylde Bird Club website. 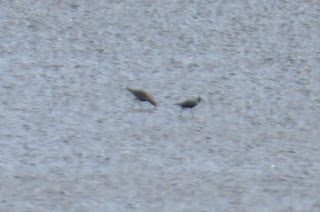 From here we headed to Arnside Knott in north Lancashire to search for butterflies, especially the gorgeous Fritillary species. Our main target species were Small Pearl Bordered, Dark Green and High Brown Fritillaries and Northern Brown Argus, all scarce species in Lancashire but with good populations in this area. In the car park we met a man coming off the hill who informed us that there were several fittilaries around but they weren't landing much due to the heat making identification difficult, and that he hadn't seen any argus's, however he did tell us that there were lots of Graylings around which would be a new species for all of us. So we set off up the hill which was steeper than we were expecting, and around 50 metres above the car park we came to an area of brambles and small bushes where we saw our first Graylings (pic 5) and also Small Heath butterflies which was new for Aaron. We soon located several Frittilaries flying around but as we had been told they were not landing at all for the first 10 minutes we were there. Eventually 1 stopped on a bramble flower and we crept closer managing good views and when it lifted it's wings we could see the green tinge that let us identify it as a Dark Green Fritillary (pic 2/3). There were in fact several of these in the area and also a couple of Small Pearl Bordered Fritillaries which didn't land but allowed decent views through the bins as they flew slowly around the bushes. After a while we spotted another Fritillary flying around a bush so I rattled off a few pics as like the others it didn't land, and on looking at them on the camera I could see the missing third spot on the bottom wing that identified it as a male High Brown Fritillary (pic 4). Happy with these we headed back down the hill hearing Green Woodpecker (yeartick) and Nuthatch in the woods around the car park, and also our first Painted Lady butterfly of the year at the year in the car park itself. 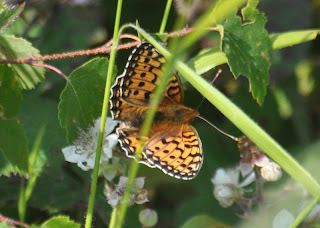 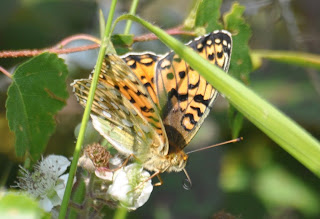 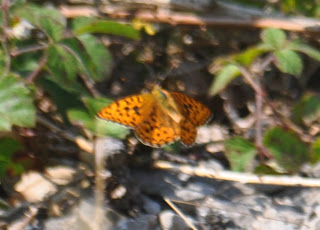 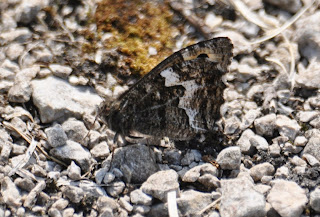 From here we then crossed the river into Cumbria and onto Foulshaw Moss where the main focus was dragonflies and we quickly found a pool that had dragon and damselflies all around it, of many different sizes and colours. There were several small dragonflies around the wooden viewing area that we were stood on, some black and some yellow, so I photographed these and we identified them as Black Darters (pic 6 is male, pic 7 is female), one of our targets and new for us. There were plenty of Four Spotted Chasers, several large Emperors and at least 2 Black Tailed Skimmers were also present. Also close to the platform was an area of cut reeds and grass where damselflies were mating and egg laying. There were lots of beautiful Emerald Damselflies that were new for us (pic 8/9) giving brilliant views along with small numbers of Azure, Large Red (pic 11) and Common Blue Damselflies (pic 10). 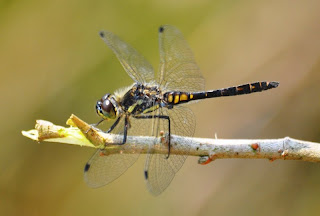 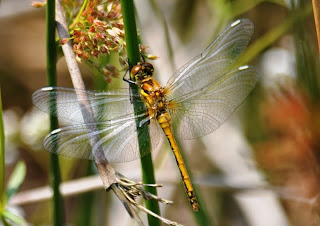 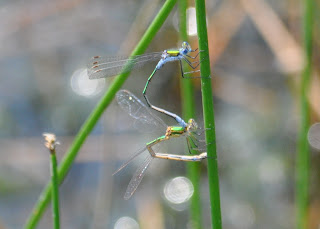 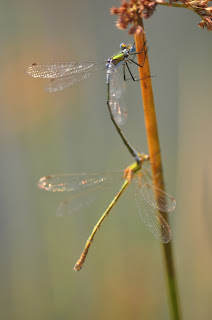 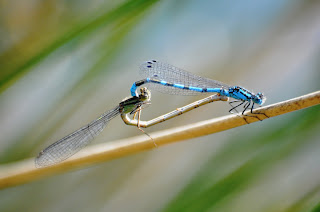 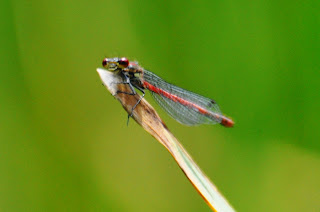 Further round the boardwalk Ash found a metal sheet which we carefully lifted up revealing a Common Lizard which scuttled off, a new species for me in Britain, and further round still Ash again flushed a day roosting Large Emerald moth (pic 12) that landed nearby allowing us great views of this beautiful moth and another new species for all of us! We headed back to the pool where we met a man (the only other person we saw on the reserve!) who asked if we would like to see an Adder, to which there could only be one answer as I have always wanted to see one. He led us along the main path and then off it onto a smaller track towards another larger metal sheet which wasn't visible from where we had already walked, hence why we missed it. I got my camera ready and when he lifted the sheet up I was greeted with a stunning Adder that took a quick look around before slithering off into the undergrowth nearby. This was certainly one of the highlights of the day and might even knock the plover off the top spot. However I know this is a birding blog and there were some birds around, a couple of Lesser Redpolls were flying around calling loudly, a male Stonechat around the car park area was a yeartick for the others and only my third of the year, and a female Siskin that landed in a tree next to the path as we were walking back. 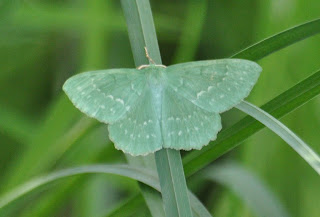 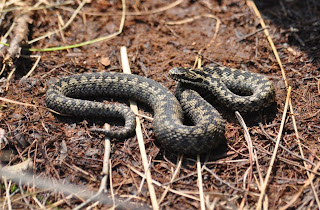 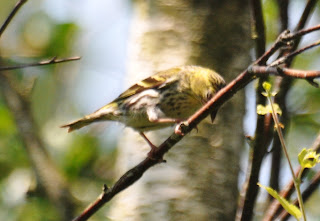 Our final site of the day was Methop Meadows, just down the road from Foulshaw and similar habitat, a large heathland bordered by woodland. This is a good site for Large Heath (pic 15/16) butterfly and we saw them all over the place whilst we were there, although like the Fritillaries earlier they didn't land very often. Talking of Fritillaries there were several Dark Green Fritillaries flying around and also plenty of day flying moths that we mainly focused on. We found Common Heath, Silver Y and then I flushed a orange moth that flew off so I started to follow it across the heath. It went down about 20 metres ahead of me so I made my way over but suddenly found my right leg falling down a concealed hole up to my knee and when I pulled it out it was covered in mud! The inside of my shoe was soaked but relatively clean, but my sock was completely brown as were the bottom of my trousers and up my leg. I turned round and walked towards the others who couldn't contain their laughter, and to make matters worse they had just caught one of the moths I was chasing (a Clouded Buff). I managed to clean most of the mud off but I was still soaked and had to take the sock off and carry it with me, not the best end to the day to say the least! There was a Tree Pipit singing in the area which made me a bit happier as we headed back to the car started home, which took longer than expected due to an overturned van on the road just west of Milnthorpe. 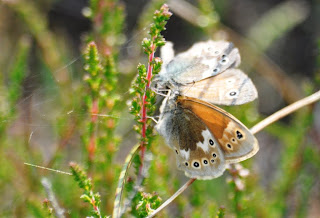 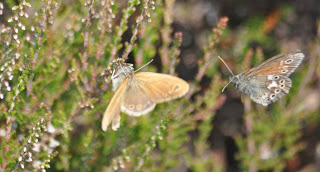 So all in all an amazing day, 15 new species for me (1 bird, 5 butterfly, 5 moth, 1 dragonfly, 1 damselfly and 2 reptiles) and visited some amazing sites on a gloriusley warm and sunny day. I will do a post soon with a full list of the days species.
Posted by Jonny Scragg at 08:09