A gorgeous day dawned and once again I was up as early as possibly to make the most of it. Patch 2 was my destination of choice today as I knew it would be a good place to catch up with my target species for the day, the very appropriately named Chiffchaff (yeartick). Arriving at the north end the unmistakable call of the bird rang out from the trees by the bridle path, a brilliant bird and my first real migrant of the spring. There were also plenty of recently emerged butterflies in pristine condition on the wing today, mainly Small Tortoiseshell but a couple of Peacock were also noted. However in contrast to the new signs of spring bursting up all over the place, there were still some areas where winter was attempting to hold onto its grasp of the area it had controlled for the past few months, sound familiar... A quartet of Brambling were feeding together on the seed at the feeding station, the most I have seen together here at one time and also the most prolonged views I have had which was a treat. Another bird that I associate with winter is the Siskin, and it didn't take long for me to find the now seemingly resident flock of birds in the alders opposite the feeders. 6 birds in all, 4 of which were stunning males, showed very well allowing for close views and a few dodgy photos to be had. 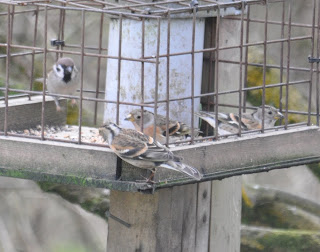 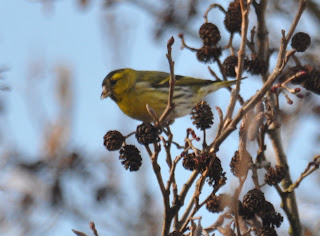 It was then that the photographer in me took over and I headed for the only place on the mere that I knew would give me a chance of photographing Water Rails, the hide me, Ash and Aaron have dubbed the "tin can" hide due to its small size and cramped interior. Unfortunately I made the amateur error of entering the hide in a not so gentle manor, resulting in a great view of the rear end of a bird disappearing into the reeds as soon as I sat down. Luckily I knew it would return after a while and my patience was rewarded as within 20 minutes it re-appeared and tentatively made its way out into the open; typically whenever I tried to get a photo there was a perfectly placed reed obstructing part of the view. After making it halfway across the gap in front of the hide it suddenly remembered that it had evolved wings which enabled it to fly, and promptly flew the short distance to the reed bed on the other side of the hide and out of sight. 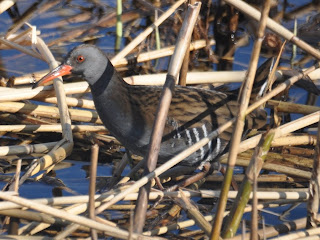 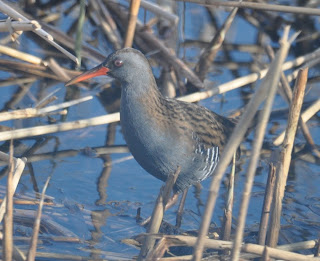 Throughout the visit I had been hoping to chance upon an early sand martin but by midday it was apparent that they were staying away from the mere, so I decided to take a walk round Stanley Park and hopefully get some good shots of the herons collecting nesting material on the island. A large sign had been errected next to the side entrance to the park, and on closer inspection it revealed that the RSPB had a stand set up at the far end of the lake to show people the nesting Grey Herons. I headed round to the heronry and got talking to the people who were manning the stand and showing people the herons that were on the nests through a couple of set up telescopes. I was amazed by the number of people who seemed to be genuinely interested in the birds, especially the number of younger people looking through the scopes and asking questions. There was just 1 bird that was repeating the process of flying down to the bank of the lake and finding a suitable twig, getting it in it's beak and then flying once round the island before landing on its nest and adding the stick to the intrical web of wood woven into the round shape that we all recognise. This bird provided a good photo oppourtunity for me and another photographer present and I spent 2 hours there chatting to the voulenteers and enjoying the birds in the glorius mid afternoon sunshine and high temperatures. 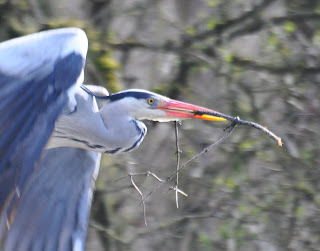