A real contrast of seasons whilst walking round the local patch on Saturday, with a brisk northerly wind biting at the skin whilst at the same time the sun shone down warming everything it touched. The birds were also buying into this clash of seasons, with a large flock of at least 60 Fieldfare over Blackpool Road whilst I was walking up towards the crem showing that winter is still clinging on. However the driveway up to the crematorium was flanked with waves of yellow and purple crocuses, a vibrant splash of colour on an ever brightening landscape. On Pond 1 the usual 5 Canada Geese were present coming to bread and they have now got so used to me that they will take it from my hand. 7 Greylag Geese were feeding close by and the bird with the damaged wing was still present with them, and other birds present on the water included 22 Mallard, 2 Moorhen and 2 Coot. A flock of 40+ Redwing were also present in the crematorium, although they were very flighty and didn't allow any close viewing, which wasn't helped by a pair of Mistle Thrushes that were constantly harrying them. 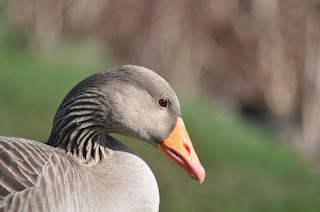 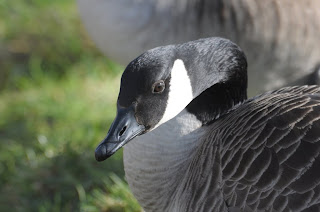 It was then on to Bispham Marsh where the duck numbers were greatly reduced from when I visited earlier in the winter. A male Tufted Duck was new in but seemed quite at home in the middle of the lake, as did a Cormorant fishing on the more secluded south side of the marsh. It was great to see that the pair of Great Crested Grebes have returned after disappearing over December and January, and I watched them performing their beautiful courtship dance with the male presenting pond weed to the female. 5 Teal were also nice to see, including 3 males in their gorgeous summer plumage. A Great Spotted Woodpecker in the trees at the north end made for a nice end to the day and hopefully I can follow the fortunes of all these birds in the next few months.
Posted by Jonny Scragg at 13:53