I had planned to go to Rossall Point this morning to try and see the Purple Sandpiper at the high time wader roost, however this didn't quite work out as I didn't wake up till 11:30! Putting this aside I decided that the best plan was once again to head to Pilling Marsh where a large flock of Pink Footed Geese had been present the previous day. Arriving at the car park I could see at least 5000 birds to the east of where I was and whilst walking towards them I spotted a small group of birders already present, and to my surprised as I neared I could see that it was Ash and Aaron whom I spent 11 hours with at Marton mere last week. Unfortunately they hadn't seen any other species amongst the geese and they soon headed off to look for Grey Partridge and Little Owl further inland. Just after they had left I spotted a 1st winter White Fronted Goose with the closest flock of birds and I headed further along the sea wall to join Chris Piner who had also just located this bird. A quick text to Ash resulted in him and Aaron running back towards us from the car park at full speed which provided me with a good laugh! Luckily they got the bird through my scope and then Chris found a Pale Bellied Brent Goose (yeartick) a little further to the right of the white front, both of our target species, result. I soon managed to find the Dark Bellied Brent Goose feeding nearby which allowed for a great comparison between the 2 different forms, showing just how different they actually are. We then headed for Glasson stopping along the way to count the Whooper Swan flock near Sand Villa, 80 birds in total although none of them were ringed. 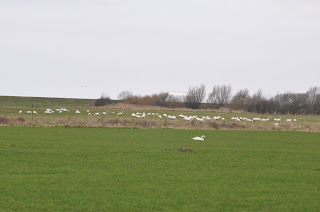 On the Conder Estuary a pair of Spotted Redshanks were showing brilliantly along with at least 30 Redshanks allowing for a good comparison between the 2 species. A single Greenshank (yeartick) was also feeding nearby before a female Sparrowhawk shot over the marsh and it flew out of view. A male Goosander feeding in the creek was a nice surprise and continues my good run of records of this species so far this year, which seems to be coinciding with a large influx of birds into the rest of the country. With 2 yearticks I was happy and headed home, stopping off briefly at Bradshaw Lane to see what birds were on the feeders.. At least 30 Corn Buntings were a nice surprise and also nice to see a large number of them together.