Another evening at the patch today again saw plenty of ducks on Bispham Marsh with a good change over between yesterday and today very noticeable. The drake Ring Necked Duck was once again present however it was on the southern half of the lake which is mainly out of view and meant that it was too far away for decent photos. It was sticking close to a female Pochard, also new in, and seemed intent on following it everywhere, much to the annoyance of the Pochard who looked like to be trying to get away on some occasions! 2 male and a female Shoveler were the other ducks that were new in and take my duck list on the marsh from the 2 days up to 7 species which is very good for this small inland site. The pair of Great Crested Grebes were once again displaying to each other and a pair of Grey Herons were roosting out on the island with 4 Teal close by. 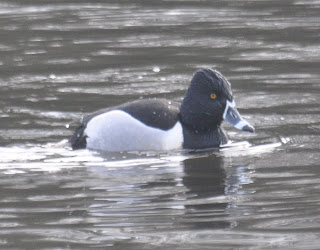 Away from the water the male Great Spotted Woodpecker was once again calling from the trees on the west side, and I managed to prove my theory that this was a different bird to the pair in the crematorium as walking back through the crem later on I spotted both the male and female together. A male Reed Bunting was feeding in the reeds next to the feeding area before latching onto a mixed tit flock that contained at least 10 Long Tailed Tits.
Posted by Jonny Scragg at 15:48