Yesterday morning I decided to get down to Rossall Point early to try and make the most of the migration both on the sea and also overhead. Unfortunately when I arrived at 6:30 there was a mist offshore that restricted visibility to c50 metres. It cleared up after 30 minutes or so and in the next 3 hours I saw:
1 Little Gull
24 Gannet
39 Sandwich Tern (shot from farne islands)
12 Red Throated Diver
2 Red Breasted Merganser
21 Common Scoter
7 Auk sp
4 Razorbill
1 Guillemot
2 Shelduck
2 Mallard on the sea!
131 Meadow Pipit
37 Swallow
2 Wheatear
7 alba Wagtails 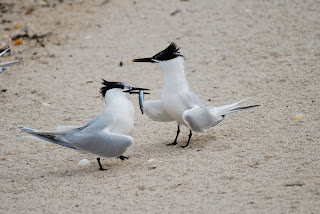 Ash joined me for the last half an hour before the visibility decreased again so we decided to head to the mere to see if any early more warblers had dropped in. We met Larry the ranger just before we reached the mere who told us that 2 Grasshopper Warblers had been heard and also a few Whitethroats seen, however typically I didn't see or hear any of them. There had obviously been a big influx of Sedge and Reed Warblers as we heard at least 3 and 8 respectively around the reeds. 2 different Sparrowhawks were hunting around the mere and I managed to grab the below shot of a female that shot through the reeds past us. 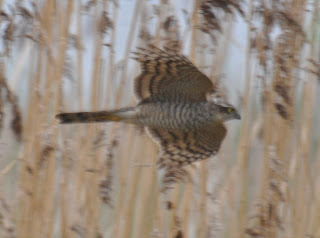