The Birdguides server was down most of yesterday and this morning which meant that I didn't find out that a pair of Black Winged Stilts had been found at Martin Mere till a couple of hours after the news had gone out. Luckily for me my mum was off work and agreed to take me to see them, my little brother also tagged along even though he isn't much of a birder anymore. Luckily when we arrived at the Ron Barker Hide the Black Winged Stilts were still present and showing well, a male and female feeding together in the shallows. In 2006 a pair of birds attempted to breed on the mere but the nest failed, and this could possibly be the same pair returning again and hopefully they will attempt to raise young once again. I got a couple of distant record shots as they fed at their closest point to the hide (still quite far away though). 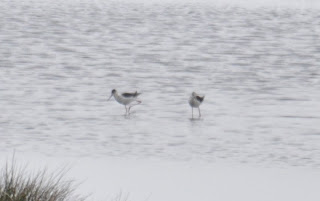 Other birds present on the mere included a fine Yellow Wagtail (yeartick) that dropped in briefly before disappearing into a ditch and not coming out again. 42 Avocets were counted from the hide and these didn't include the birds that were present on the actually mere itself, so the site count will probably be much higher. At least 2 Ringed Plovers were feeding around the shingle islands and I briefly spotted what I think was a Little Ringed Plover that was moving along an area of mud that had grass growing in front of it, so the views were obscured hence why I didn't get a positive ID.
Posted by Jonny Scragg at 15:51