Bullfinch Brightens up the Day

The recent high temperatures dropped away today and coupled with a stiff westerly wind there was a definite chill in the air. I had a relaxing morning around the house before a quick visit to Rossall Point early afternoon produced a single Gannet (yeartick) flying south but not a lot else. Clearly the best time to be there is the morning as auks were passing by at a rate of 500 per hour early today and there were 3 Pomerine Skuas off Heysham at 8:30. Hopefully I will be down there early morning either tomorrow or Thursday. 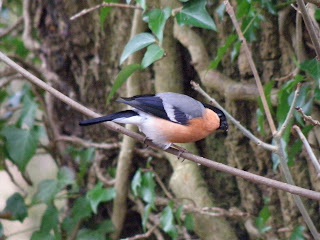 In an attempt to tick off a few more year birds I headed across to Myerscough Quarry where 9+ Little Ringed Plovers were seen the other day, but of course today they had all disappeared and there was absolutely no birds of note present. Slightly disheartened by this I remembered that I was relatively close to Preston so my dad agreed to take me to Cottam Brickworks where I hoped to catch up with my most glaring omission for the year, Jay! Walking around the site a couple of singing Chiffchaffs were located and several Swallows passed overheard north, but none of my target species were found; however just as I was heading back a flash of red out of the corner of my eye made me turn round and set my eyes on a gorgeous male Bullfinch (yeartick). This was my first Bullfinch for 6 years in the Fylde and takes my British yearlist up to the 150 mark, and 147 for the Fylde. The photo above was from Leighton Moss last year.
Posted by Jonny Scragg at 14:50