A glorious day dawned this morning and I was up bright and early, no not to go out but instead to watch the Chinese Grand Prix which was one of the best races I have ever watched (and Hamilton won :D). With the temperature rising outside I decided to take advantage of the warmth and take myself down to the mere to look for a few warblers that had been seen in the past few days. Walking from Stanley park towards the reserve I took a different path to my usual route as it took my along a stretch of brambles and bushes which is usually a safe bet for a few warblers to be singing. Literally the first bramble patch I walked past held a singing Whitethroat (yeartick) which was skulking around in the bottom of the bush hence the crap record shot below of it hiding from me. 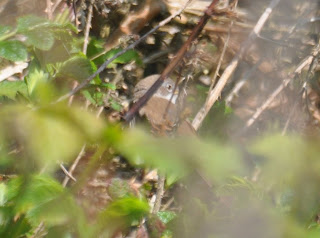 Walking further along and after passing another Whitethroat I heard a trilling sort of call coming from a small area of reeds and brambles, a Grasshopper Warbler (yeartick). Although it was only no more than 15 metres from me I only glimpsed it once before it darted away again, I'm hoping to get back in the next few days to get better views of it or another one on the reserve. I also heard a second bird just before the entrance gate in the north west corner but once again it was elusive and didn't show. Along the north side I saw or heard Willow Warbler, Chiffchaff, Blackcap and Reed Warbler in quick succession before a strange call just after the container hide caught my attention and I paused to listen out for it again. I had an inkling that in could have been a Lesser Whitethroat however since I didn't recognise the call I tried to get views of it for confirmation, easier said than done! 20 minutes later I had had lots of brief views of the bird all of which seemed to confirm what I thought, so I rang Ash and asked him to play the song (from his phone) so that I could check if I was right, and yes it was a Lesser Whitethroat (yeartick), my earliest ever record of the species. Since I couldn't get a photo of it I had to be contempt with the other warblers that were around, like the Willow below. 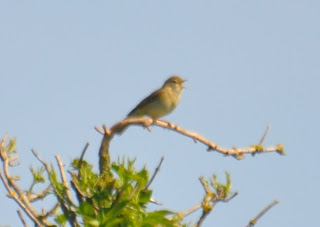 On the exposed bank along the back of the mere a brisk wind made for a slight chill to the air however the mere looked sun baked and calm in the midday sun. I notched up my 8th species of warbler for the day with a Sedge Warbler singing near to the outflow, and further round past the Fylde Bird Club hide the song of a Cetti's Warbler blasted out from the reeds, completing my Mere 9 species of warbler for the day which is the first time I have been able to do so. 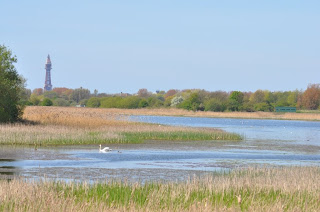 Away from the birds Butterflies were very much in evidence today with my first Speckled Wood of the year seen along with single Green Veined White, lots of Peacock, Small White and Small Tortoiseshell. 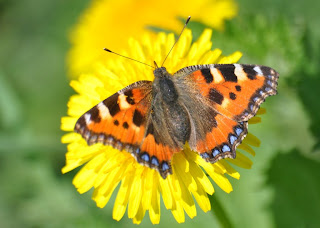 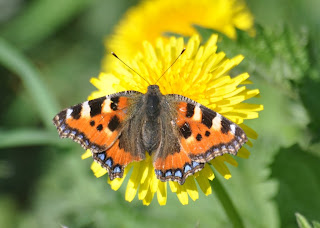