After school today I decided to take a walk around my full local patch, taking in Carleton Cremtorium, Bispham Marsh and then Robins Lane. First port of call was the crematorium where the 3 Coot chicks were still looking as healthy as ever, with the parents tentatively feeding them, however they were also bringing twigs and reeds to the nest which could suggest that they are preparing for a second clutch of eggs. 2 Canada Geese had returned to the pond which could well be the pair that were briefly on the flood on Robins Lane on Tuesday, and the now regular single bird was present in the south fields, along with a pair of Shelduck which I haven't seen since the 1st of this month. I walked round the edge of the crem where I managed to locate 3 singing Blackcap along with at least 1 Chiffchaff briefly. 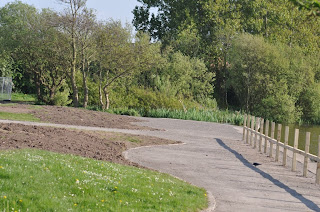 Arriving at Bispham Marsh it was obvious that there was work in progress around the feeding area, which from what I can see will look very nice when it is finished; I suspect this will be due to the funding for the North Blackpool Pond Trail which will hopefully increase the access and improve the paths around the marsh. On the marsh itself were a pair of Great Crested Grebes on a nest, a female Mallard with 8+ young, a Coot pair with 5 young, and a pair of Grey Herons one of which was very approachable on the east side. In the woods around the lake were at least 3 Chiffchaffs singing away, as well as single Willow Warbler and Blackcap. 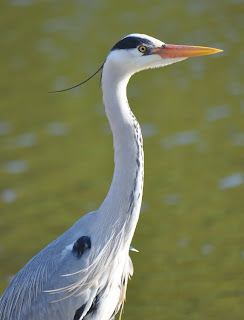 The walk from the park to the flood on Robins Lane takes me through some prime warbler habitat, mainly a path with bushes lining it and fields either side of that. A hoped for but still none the less surprising sighting was a Grasshopper Warbler heard reeling at the north end of Robins Lane, amazingly my 7th bird of the year which just shows that they really are having a great year in the north-west (this was also my first on the patch). On the flood the Coots were much easier to count today due to the fact that 2 pairs have now got recently hatched young, one pair with a single chick and the other pair with a duo of young. There was also a fifth adult bird at the back of the flood which was seeing off any Mallards that got too close, which could suggest that there was a bird sitting on eggs nearby. The single Little Grebe was still present but I am now thinking that it is just a single bird and that there isn't anymore lurking around the fringed of the trees.
Posted by Jonny Scragg at 14:38