It was 11 days ago that I got my last year tick which was a bit of a disaster since I was trying to keep in contact with the top listers in the Fylde Yearlist Competition (currently 6/14). Luckily for me I am now off school for 17 days so I have set myself the task of seeing 17 yearticks which will bring my Fylde Yearlist up to 157. So to get started I headed down to Marton Mere today to see what new migrants had dropped in with the targets being House Martin and Blackcap. Well no sooner had I arrived on the mere than I heard a loud song coming from the area of bushes around the viewing platform, and when I went to investigate I found a stunning male Blackcap (yeartick) singing his heart out from the top of a hawthorn bush. There were at least 3 more males singing around the mere along with more migrants in the form of a single Willow Warbler, 7+ Chiffchaff and 3 Sand Martins briefly before flying north. Some rubbish record shots below just to prove that the migrants were around. 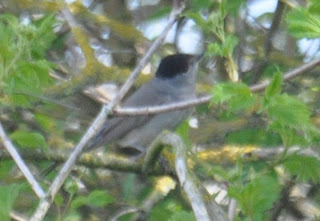 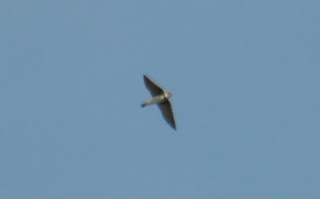 The mere was markedly quieter than on recent visits as most of the ducks have now moved off to their breeding areas. 3 Gadwall and 2 Shelducks were the best on the mere itself and a single Oystercatcher was sitting on the scrape before flying off south. There was only one Cetti's Warbler singing today which could suggest that the other birds have now paired up and are going to breed, so hopefully in a couple of months we will have a few young birds appearing. Generally the birds were elusive today but the usual pair of Greylags were feeding in front of the Fylde Bird Club hide allowing for a few photographs. 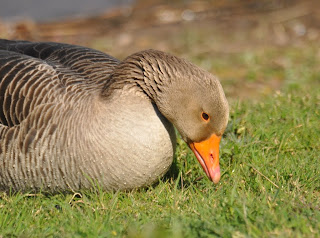 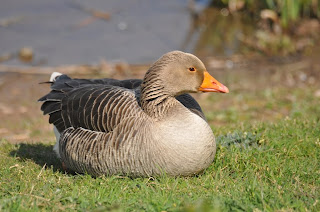 Away from birds I noted 5 species of butterfly today, Peacock, Small Tortoiseshell, Small White, Green-Veined White and Comma. Also a surprise mammal sight in the form of a Weasel running across the path at the west end of the mere, my first one here for many years.
Posted by Jonny Scragg at 14:42