Once again today the weather was simply glorious with wall to wall sunshine and temperatures up into the low 20's! I hadn't really planned to do much birding but I did my usual check of Birdguides anyway in the morning just to see what was about, the start of so many previous twitches! Today was no different with the quarry being a singing male Wood Warbler in a park in Watson Road Park, near south shore, which I discovered was just round the corner from Ash's house when I looked on a map. A quick call to him revealed he was at the sand dunes in Lytham looking for lizards but that he would go have a look on his way home so I decided to take a look as well. It was 5km from where I got off the bus at Victoria Hospital to the park which normally wouldn't be too hard, however I hadn't factored for the sweltering midday sun and by the time I reached the park I was starting to boil! I spotted Aaron under a patch of sycamore trees where he got me onto the Wood Warbler (yeartick) above us, flitting through the branches as it fed. It was quite a difficult bird to follow as when it stopped calling or singing it was hard to locate and disappeared half way through our visit. Paul Slade and Mick McGough turned up and tried to locate it before a living legend of the Fylde bird world turned up, Ed Stirling, who found hoards of rarities in the Blackpool area in the second half of the century, including a juvenile Roller in the very park we were in! 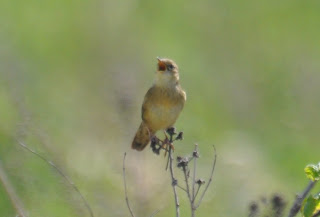 After a while of it not showing we left the others to search and headed back to Ash's for a break before going on to the mere where the rangers had counted 13 Grasshopper Warblers that morning, a huge number for the Fylde. We decided to check Lawson's wetland first as this was the area where most of the groppers had been seen, and sure enough it didn't take long for us to locate a calling bird amongst the brambles, that was the easy part as they can be very elusive and not show at all. Luckily the Grasshopper Warbler soon popped up onto a bramble and began calling away for a few minutes, only 20 feet or so from where we were standing allowing me to get my first good views of the species and also a few dodgy records shots. Another bird blasted out from nearby and we had a 3rd bird further along the path although neither of these showed but remained skulking out of sight. In contrast to these the Common Whitethroats were showing from every bush we found and were seemingly undisturbed by us standing down to 3 feet from them! We counted 13 birds in total between Lawson's field and the green container hide on the north side of the mere, and a single Lesser Whitethroat in the same area as on Saturday. We failed to see or hear Sedge and Cetti's Warbler meaning we only got 8 species for the day, however 10 species in 4 days is certainely not bad going for the Fylde. 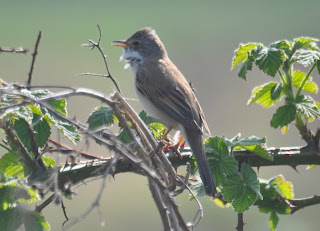