A relatively early start (for me) saw me at Rossall Point at 9:30 to see what passed through in the high winds that were blowing in from the sea. I used the coastgaurd tower as shelter and over the course of an hour I had:
73 Sandwhich Tern, 23 Gannet, 2 Little Gull, 2 Red Throated Diver, 1 Guillemot (yeartick), 1 Razorbill, 12 Auk sp, 2 Red Breasted Merganser and 16 Common Scoter. The Guillemot took me to 150 for the year in Britain in 2011.
Later on in the afternoon my dad agreed to take me out for a few hours so we headed down to my local patch first for a quick check on the numbers. A small flock of hirundines were feeding over the flood on Robins Lane and in amongst the 8+ Swallows I picked out a single House Martin (yeartick) which hung around for the next 10 minutes or so. The male Little Grebe was still present and 3 Gadwall (1 male) were new in. Finally it was up to the Conder estuary where my dad located the Little Ringed Plover (yeartick) on the pools by the road, with the two Spotted Redshanks close by starting to come into thir summer plamage. 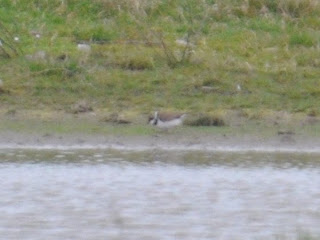