This morning I was up bright and early (well 8am which for me is early!) to get down to Fleetwood Nature Reserve to see if the Short Toed Lark from yesterday was still about. Arriving in the car park a birder who was sat in his car said that it was on the east side of the reserve on the other side of the bridge over the lake, so I headed round there and found David and Jackie Moreton watching a bird although they weren't sure if it was the lark or not. Unfortunately I discovered that it was a Skylark when I got it in the scope so me and Jackie walked on a bit further while David was sorting his camera equipment, however he quickly shouted to us and pointed to a bird that flew over our heads and landed on the gravel track next to the model aeroplane runway. We walked closer and looking through the scope I confirmed that it was the Short Toed Lark (258), and it allowed us to get right up to the fence next to the path, so it was no more than 30 feet away. With the early morning mist hanging in the air I found it hard to get any decent shots so the below photo is a record only, however to see some of David's much better shots take a look here. I continued to watch it for 15 minutes but it gradulally moved further away and more out of view so I headed back to the car and home, happy with stunning views of this Lancashire first. 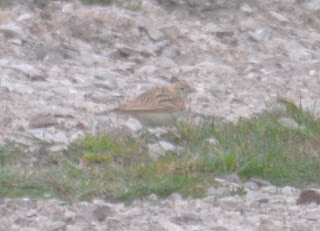 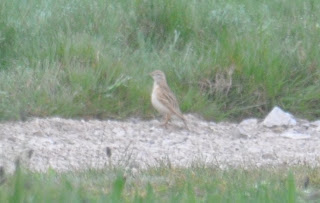