After my disappointment of missing the white stork last night I found out where it was roosting and was determined to see it before it left the roost at first light and therefore planned to get to the site before dark. I had initially planned to walk to the tip however this would have meant me setting off from home at 4am which wasn't something my mum approved of, so she agreed to wake up early and give me a lift there. So at the insane time of 5:30 (yes i know I'm mad!) we set off from home and reached the tip at 5:45 where I was met by Seamus Eaves and Ian Gardner unloading their ringing gear for a morning session amongst the reeds, and they informed me that it has flown of south 5 minutes before I arrived, bugger! Since it had been seen in the Marton Mere area the previous day I hoped it would be there again so we set off again in the hope of connecting with it somewhere along the way, and just as we were passing the goose fields opposite burglar's alley I spotted a large white bird feeding by one of the ponds in the field, the White Stork! It fed in the field for 30 seconds or so before being flushed by a farmer entering the field in a tractor, flying south again low down obviously looking for somewhere else to land, which it did on the football fields by the Bourne Poacher after being mobbed by a whole trail of gulls. The light was terrible so I could only manage a record shot before it once again took off over the houses of Thornton and then south-east towards the river where it was found later on. Amazingly this is the second white stork to turn up in the Fylde in 4 days, as the adult ringed escapee from last month was seen on Lytham Moss on Monday, however as this bird is an unringed 1st summer bird that has arrived during a period of high pressure that has brought lots of Purple Herons and Bee-eaters into the country then I would think it has pretty good credentials to be wild. My first British Stork and my 257 British bird. 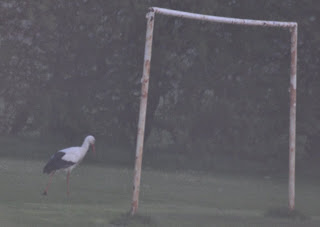 The rest of the morning was spent over wyre with the highlights being a Tree Pipit (yeartick) over Fluke Hall, a single Whimbrel on the marsh at Pilling, Spotted Redshank and Common Sandpiper at the Conder, and a flock of 60+ Skylark from at Bank End. In the afternoon I took a trip down to the mere however since the highlight was 4 Mute Swans that flew in from the north before being seen off by the resident birds, you can probably guess that it was pretty quiet! 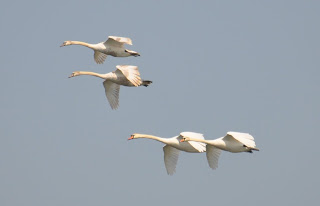