With more warm weather forecast I asked my mum to drop me down at Rossall Point in the morning for a bit of vis mig and also a seawatch. I arrived at 9 which I suspected would be a bit too late for migrants and sure enough when I reached Paul Ellis, Paul Slade, Kinta Beaver and Len Blacow at the point I was told that they had already had a couple of Tree Pipits over, along with lots of Lesser Redpoll and also Arctic Terns offshore. There were plenty of Sandwich Terns (yeartick) offshore, at least 30 being a good estimate, many of which were feeding offshore and were joined by at least 2 Little Gulls (yeartick) for a while before they disappeared. More usual fair on the sea included a Red Throated Diver, 10+ Red Breasted Mergansers, 100+ Eider and 3 distant auk sp that could of been guillemots however they were too far out to be positively ID'd. One of the strange sights of the day was a scoter that was hanging around the eider flock, that had a long white line down the side of its body. In the past couple of days it had been reported as velvet however today we got good views and it was clear that it was in fact an aberrant Common Scoter! The only vis mig of note were 4 Lesser Redpolls early on and a few White Wagtails lower down. I met up with Ash, Aaron and Maurice who were a little further along the promenade and I got offered a lift to the mere with them. 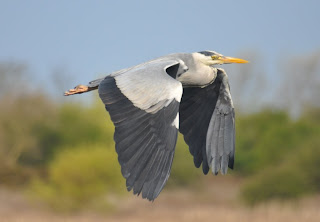 Like yesterday the mere itself was pretty quiet with 3 female Goldeneye being the best birds, although 5 Great Crested Grebes seemed to be a bit of an influx. After a while of being in the FBC hide I heard a warbler calling briefly in the reeds to the right, and a couple of minutes later Ash and Aaron also heard it and confirmed it to be a Reed Warbler (yeartick). We decided to move down to the "tin can" hide to try and get closer to it and although it didn't sing again, a Cetti's Warbler blasted out its song right next to us and we watched 2 birds chasing each other around the reeds, at one point even flying behind the hide! We walked to the bench in the NW corner watching the different warblers along the way, at least 8 Blackcaps (2 female), 3+ Chiffchaffs and a single Willow Warbler. To finish things off we walked round to the dam at the outflow in the possibility of hearing a Sedge Warbler (yeartick), and surprisingly we located a singing bird just south of the outflow, although it was singing sporadically and quite quietly for a species which is usually very loud. 6 species of warbler in a day in early April is exceptional for me and both the Sedge and Reed Warblers are my earliest ever by one day. 4 Yearticks today take me up to 148 for the year and leave me on 5/2 for the holiday, way on the way towards my target of 17 in 17 days.
Posted by Jonny Scragg at 13:18