Another day when fog enveloped the landscape first thing. My brother was having his birthday party today from 12:30-13:30, and typically the highest tide of the year so far was at 12:49. I wasn't particularly bothered as the fog would have meant that it would have been virtually impossible to see anything anyway. However when it started to lift at 11:30 I thought I would try my luck at persuading my dad to drop me down there while they were with my brother, and luckily he agreed. 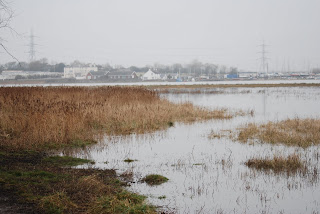 I arrived about an hour before high tide but the creeks were already full so I decided to wait at the bench by the car park that looks out over the main area of marsh, and it very quickly started to disappear under water. There didn't seem to be many waders about unfortunately but there were plenty of Teal and Wigeon on the river. Skylarks were going up from the marsh in small numbers and after a while I took a walk along the river towards Skippool Creek to see if there would be any more birds on the marshes down there. However I found that the river had come right up to the path further upstream and in parts flooded over it meaning that I had to change my original route somewhat. 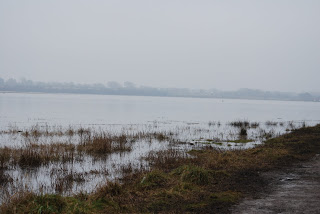 Since I had nowhere else to go I had to back the way I had come, which luckily meant that I spotted the large flock of small birds on the part of the marsh that wasn't flooded. The amount of dogs around finally worked to my advantage as the flock was flushed close to me and I managed to see what species it was made up of. 30+ Skylark, 40+ Linnet, 20+ Meadow Pipit, 10+ Goldfinch and most surprisingly of all a single Twite (yeartick 100). A couple of Snipe (yeartick 101) were also flushed by the dogs and a female Red Breasted Merganser flew downstream.
In the afternoon the fog was still lingering at around 100 metres visibility which was good enough to warrant a quick whiz round Over Wyre for a few yearticks. Conder Estuary was allot better than on my last visit, with Spotted Redshank, Common Sandpiper, Grey Plover and Little Grebe being added to the yearlist, but Glasson Marina was still devoid of any Great Crested Grebes, where are they all? 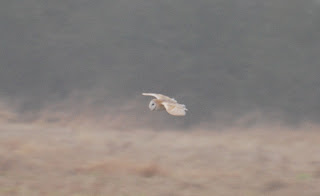 On the way home we pulled in at the feeding station at Bradshaw Lane to try and get Stock Dove for the yearlist, however there was already a car present with a birder looking into the fields on the opposite side of the road. Getting out of the car he pointed us in the direction of a stunning Barn Owl (yeartick 106) that was hunting in a far field. It steadily made its way closer to us until it was in the field closest to us giving great views. Then as it flew down the hedgerow that separated the fields I noticed another white bird in the bush behind it, a second Barn Owl! I said to my dad and the other birder present that there were 2 birds and they replied "yes it's mobbing the first bird now", hang on a minute? 3 birds! I've only ever seen 2 birds together before so this was a real treat and a truly magical moment. The original bird continued to hunt for the next 5 minutes whilst the 3rd bird perched on a hay bale and the 2nd bird remained in it's bush. At this point the fog rolled back in so we called it a day and headed for home. 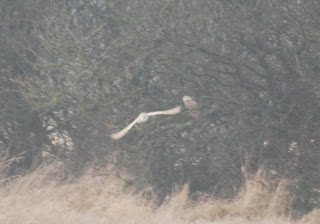 (can just make out 2 birds in this shot)