Another day clearing up the yearticks today and getting down to the south of the Fylde this time to try and see the raptors that are usually present over the marsh at Warton. High tide was at 10am so I got down there in the morning and joined a small group of birders on the bank over looking the marsh. Maurice Jones was there and informed me that 1 of the 10 White Fronted Geese from the previous day had been shot by wildfolwers that morning and none others had been seen while he had been there. There were at least 2000 Pink Footed Geese on the marsh however all I could pick out amongst them was a single Leuistic bird and a white neck collared bird with the letters LPT on it (awaiting details).


Single Merlin and Peregrine were easily located on the many pieces of wood and metal strewn across the marsh and after 10 minutes the ringtail Hen Harrier appeared from the east and continued to quarter the marsh before disappearing off towards Lytham. Sprrowhawk, Buzzard and Kestrel also showed well on the marsh but unfortunately I missed a Marsh Harrier that turned up briefly that would have completed the Ribble 7 as Colin Bushall (link in sidebar) puts it. 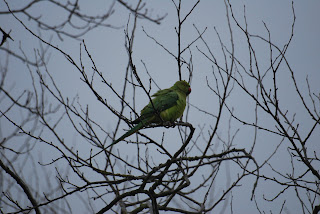 The White Fronts didn't show up while I was there so I decided to go to Lytham Crematorium to get the Ring Necked Parrakeet's to the yearlist. I could here them as soon as I got out of the car and immediately 2 flew over calling in their high pitched voices. Quite a few other birders were present and they pointed out some more in the trees, 6 birds in all and a flyover Skylark also made it onto the yearlist.