Sorry about not doing a post yesterday it completely slipped my mind, so I'll do 2 today to make up for it. I received the details today of the neck collared Pink Footed Geese that I saw at Warton Marsh on the 3rd of this month. It had a white neck collar on with the letters NTP on it, the details of it's movement are as follows: 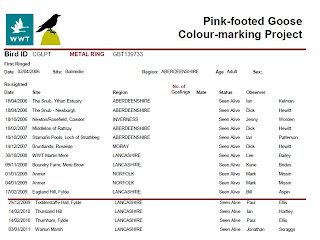 Some familiar names on there as the bird is now in it's 3rd winter in Lancashire. The previous 2 winters it was seen in Scotland and the data also highlights that the flocks frequently move between Norfolk in Lancashire in spells of hard weather, like this bird did in the winter of 08/09.

I didn't get out much yesterday however the birds around the garden provided some other interesting long staying birds. There are 2 partially leucistic birds in my area, a female House Sparrow with white wing flashes and a Carrion Crow with white inner wing feathers. Both these birds have been out for at least a year now. I am hoping to get some photos of the Sparrow soon as it is a particularly striking individual.

If you can't get a larger version of the picture the details are:
Ringed 02/04/2006 Site - Balmedie Region - Aberdeenshire